North and South American airline stocks slumped on Thursday (24-Jun-2010) for a fifth consecutive session, as the Dow (-1.4%) fell. The market was down after disappointing earnings results from large businesses and uncertainty over the financial-overhaul bill.

A prediction by Hudson Securities analyst, Dan McKenzie, that competition will result in at least one more bankruptcy in the next five years also pushed airline stocks lower.

American Airlines’ (-1.2%) decline was not quite as sharp as others for the day. American Eagle CEO, Dan Garton, stated during trading that AMR Corp will include private equity and a leveraged buyout among options for its regional airline subsidiary. Other options being evaluated include leaving the carrier as a wholly owned unit of AMR, the divestiture of the carrier and a separation of the two entities. 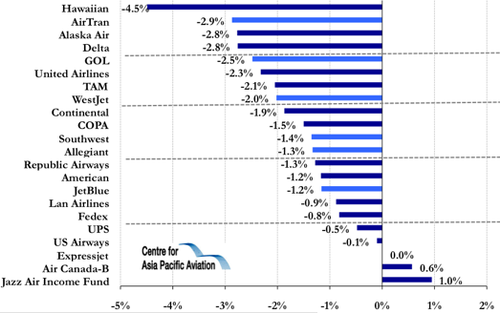