This scale of falls is unprecedented in US airline history, with over half of the value of a major part of the industry shredded in the space of a mere three months.

And it is not as if the airlines' shares were trading at a premium before that.

Even with a recovery - or at least a slowdown in the decline - changes on this scale spell precarious futures for several airlines. 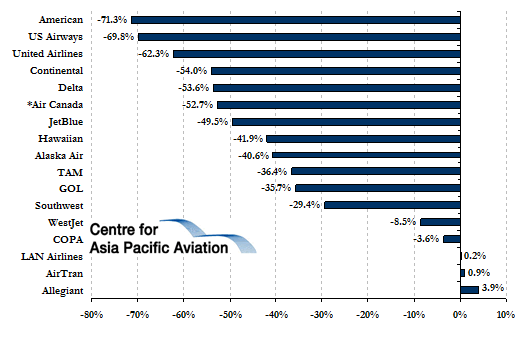 As if to rub salt into the wound, the quirky Allegiant - perhaps a model for our time! - is the only airline in the Americas to end the quarter clearly on the upside, with a 3.9% gain. And the other US airline AirTran to be in positive space, is also an LCC, up just 0.9%.

Even the mighty Southwest, the largest US domestic airline and the progenitor of the low cost model, has seen 29.4% of its market cap evaporate over the past 90 days.

Canada's airlines are heading differently, although even the more successful among North American LCCs, Westjet, has seen a market decline of 8.5%. But that is nowhere near the fall from grace of Air Canada, which lost over 20% of its value yesterday as the market sniffed bankruptcy and its President, CEO and its COO departed the carrier, to be replaced by finance and slash and burn specialists. Its B shares are down 52.6% since the beginning of the year.

In South America, LAN has maintained gravity, despite some recent negativity, with a weaker outlook in its markets, but the region's leading LCC, GOL, has lost 35.7% market value.

TAM, Central America's leading network airline, has also seen more than a third of its value disappear, down 36.4% this year.