American Airlines (+8.1%), Delta Air Lines (5.1%) and Continental (+4.2%) stocks rose strongly again yesterday (29-Jul-09), as the positive halo from Morgan Stanley’s positive analysis of the carriers the day before continued to affect the industry.

Air Canada-B (+7.3%) shares also rose, following an announcement by the carrier that it had secured CAD1 billion in funding. 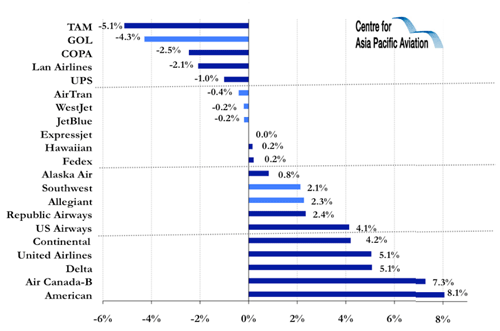 Air Canada (+7.3%) announced it has entered into arrangements to raise a total of CAD1 billion (USD) in additional liquidity through a series of financings and other transactions with GE Canada Finance Holding Company, Export Development Canada, Aeroplan Canada, and ACE Aviation Holdings. The financing surpasses a requirement of USD551 million of funding needed for the airline’s labour and pension agreements with its unions. The carrier stated that with these financings and other transactions, the pension funding moratorium and new pension deficit funding arrangements, as well as the 21-month extensions to its collective agreements on a cost neutral basis, it has strengthened its position amid the global financial downturn.