Allegiant (-0.2%) slipped on Wednesday (27-Oct-2010) as net profit for the company declined 4.5% to USD13.2 million for the three months ended 30-Sep-2010. However, the result was Allegiant’s 31st consecutive profitable quarter and eighth in a row with double-digit operating and pre-tax margins.

President Andrew Levy stated the airline has now adjusted its forward capacity plans, “taking into account the futures curve expectations for fuel prices and assuming no improvement in the demand environment”. As a result, its capacity growth rate for 4Q2010 has been slowed to an increase of between 13-15%, down from the 24% growth in capacity in 3Q2010 and the 17-19% previously forecast for 4Q2010. It also plans to increase capacity by 4-7% in 1Q2011.

The carrier also announced during trading an agreement to acquire 98.942% of the outstanding shares of AIRES, through the purchase of its parent entities. The acquisition price is USD32.5 million, to be adjusted according to variations in AIRES' debt between the value at closing of the transaction and the value as stated in the company's financial statements as of 31-Aug-2010. The estimated time frame in order to conclude the due diligence process and finalise the acquisition is between 30 and 60 days from the signing of this agreement. Once the acquisition occurs, AIRES would become an affiliate of LAN Airlines and each company would comply with the foreign ownership and control regulations in each country where they operate. If the combination with Brazilian airline TAM is successful, AIRES would become part of the new Latin American airline group, LATAM Airlines Group SA.

Elsewhere, United Continental Holdings (+3.8%) rose, as analysts increasingly see the new merged entity as a strong carrier, according to TheStreet. Soleil Securities analyst James Higgins raised the carrier’s target price to USD35 late in trading on 26-Oct-2010. The analyst also raised his FY2010 earnings per share forecast to USD4.70. Delta Air Lines (+3.4%) and American Airlines (+3.3%) were also up for the day. 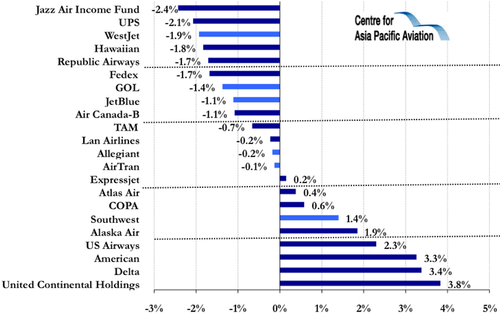