Allegiant Air is planning rapid expansion from one of its largest bases during the final weeks of 2012 and into early 2013 as it introduces flights from Phoenix-Mesa Gateway Airport in Arizona to four new markets. The push is occurring as two of Allegiant’s closest rivals – Frontier Airlines and Spirit Airlines – are enlarging the airport’s scheduled service footprint. As it looks to maintain its leading position at Phoenix-Mesa, Allegiant is also looking at potentially launching services to Mexico in 2013, using its recently acquired fleet of A319s.

Five years ago, in Oct-2007, Allegiant introduced scheduled service at Phoenix-Mesa, and selected the airport as its third base, joining Las Vegas and Orlando. At that time it launched service to 13 markets from Phoenix-Mesa. Allegiant has since steadily expanded its operation at Phoenix-Mesa and by Feb-2013 the carrier will offer flights to 35 destinations, including Honolulu. In the Phoenix-Honolulu market, Allegiant will compete against US Airways and Hawaiian Airlines, which operate from nearby Phoenix Sky Harbor International Airport.

Allegiant is now by far largest carrier at Phoenix-Mesa. But Spirit Airlines has quickly amassed a 20% share of capacity at the airport since introducing flights from Phoenix-Mesa in Feb-2012. 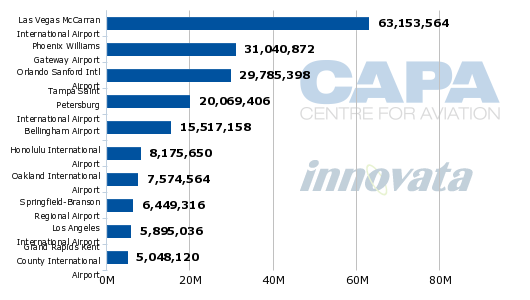 Spirit currently only serves Las Vegas and Dallas/Fort Worth (with continuing service to its largest base at Fort Lauderdale) from Phoenix-Mesa. But as flights begin to Denver on 04-Oct-2012 Spirit’s service to Las Vegas is ending.

Allegiant introduced flights from Phoenix-Mesa to Las Vegas in Nov-2011 with six weekly flights, which is an anomaly in the airline’s business model that is based on low-frequency service from large leisure destinations to small cities that have limited or no service from other carriers. Current schedules show that Allegiant now offers four weekly flights between its two largest bases.

The entry by Spirit and Frontier into one of Allegiant’s largest markets at Phoenix-Mesa marks a rare occurrence where all three US airlines that bill themselves as ultra low-cost are the only scheduled airlines serving an airport. Frontier during the last year has been working to achieve ultra low-cost status while Spirit and Allegiant boast the lowest unit costs, excluding fuel and special items, amongst US carriers.

During 2Q2012 Spirit recorded unit costs, barring fuel and special items, of USD6.05 cents while Allegiant recorded USD5.10 cent unit costs. Frontier’s unit costs were USD7.10 cents. Virgin America’s USD6.49 cents unit costs were in line with the so-called ultra low-cost carriers. But the San Francisco-based carrier follows a hybrid model and continues to rack up losses despite its low unit costs. Virgin America recently decided to slow its growth in order to achieve profitability that has so far eluded the company during its five year existence.

Allegiant is introducing a raft of new small markets from Phoenix-Mesa and service to Honolulu as it works to enlarge its footprint in the Phoenix area. It already introduced flights to Ogden, Utah in Sep-2012. Beginning in Dec-2012 new services will be launched to St Cloud, Minnesota; Casper, Wyoming; and Montrose, Colorado. The new service to Honolulu in Hawaii starts in Feb-2013.

With the exception of Honolulu, all these new markets fit Allegiant’s typical small city profile. Allegiant became the only carrier serving Ogden when it launched its two weekly flights to the small Utah city last month. Allegiant will also be the only carrier with scheduled services at St Cloud.

United and Delta both offer now serve Casper but the Wyoming city has no direct link with Phoenix. United serves Casper from Denver and Delta from Salt Lake City. United also operates service from Denver to Montrose, which is near the well-known Colorado ski town of Telluride.

Competition between Allegiant and Frontier intensifies

With Spirit’s decision to end flights from Phoenix-Mesa to Las Vegas, Allegiant will no longer compete with either ultra low-cost carrier on any route from the airport (Spirit and Frontier will compete on the route Denver). But both Allegiant and Frontier have made aggressive moves to backfill service abandoned by AirTran Airways into smaller markets as it continues merger integration with parent company Southwest Airlines. That has led to more competition between the two carriers.

Based on Allegiant’s calculations in Sep-2012, it has the most competitive overlap with Frontier, although Allegiant is quick to highlight that on average only 10% of its markets during the last few years have had competitive overlap. Four of the five markets where Allegiant and Frontier compete are from the Orlando area. Allegiant operates from Orlando Sanford and Frontier offers its flights from Orlando International.

Allegiant management during a recent presentation to investors remarked that its small city strategy offered stability. Generally, the carrier faces no competition in those markets and the economy remains somewhat stable in those smaller destinations, which makes Allegiant immune from some of the downturns in business traffic experienced by US legacy airlines.

New service by Frontier and Spirit from Phoenix-Mesa should further boost the airport’s significant growth. During 1Q2012 the airport recorded a 51% jump in passenger volume year-over-year. Prior to Frontier’s announcement that it would launch flights from the airport, Phoenix-Mesa estimated total passengers served would rise from 956,665 in 2011 to 1.2 million in 2012.

Allegiant’s expansion at Phoenix-Mesa is not being mirrored at its largest base in Las Vegas. Recently, Allegiant senior vice president of planning Jude Bricker explained it was fair to say Allegiant’s growth in its network “has been away from Las Vegas”, noting while the airline has grown available seat miles from the airport by operating larger aircraft, it has not added a lot of departures from the airport.

Mr Bricker cited rising costs at McCarran International from the development of a new international terminal that all carriers serving the airport have to endure. Going forward, he predicted some constraints for Allegiant in serving Las Vegas.

At the same time the airline is making a push from Phoenix-Mesa, Allegiant is preparing to introduce its third fleet type during early 2013. The carrier earlier in 2012 detailed its plan to add a total of 19 A319s to its fleet through 2015, joining its existing fleet of Boeing MD80 and Boeing 757 aircraft. Allegiant’s current fleet plan shows that six A319s will be introduced during 2013, followed by another six in 2014.

But the real prize for Allegiant in adding the A319s is the opportunities the carrier has long sought in Mexico. Mr Bricker stated that Allegiant has been talking about serving Mexico for years, and admits entering the market does pose some difficulties around the regulatory environment and airport costs. He referenced a “self-instituted” monopoly in the airport environment “in particular on the fueler side”, which makes fuel expensive in Mexico.

However, despite those frustrations in serving Mexico, Mr Bricker declared: “We plan to be there.” While there is nothing imminent to announce, he named both Cabo San Lucas and Cancun specifically as viable destination markets for Allegiant to serve from small US cities.

But Cancun could pose challenges for Allegiant and its strategy that it has not faced in the past. Many US low-cost and legacy carriers offer low-frequency service from smaller markets to Cancun during the winter timeframe, which could make Allegiant’s market entry more difficult than it normally experiences. During the winter timetable that begins in Dec-2012, Delta is offering Saturday seasonal flights to Cancun from Columbus, Ohio; Hartford, Connecticut; Indianapolis, Indiana; Milwaukee, Wisconsin; Nashville, Tennessee; Orlando, Florida; and from its down-sized Memphis and Cincinnati hubs.

While Allegiant would likely offer service from even smaller markets to Cancun, Delta’s service pattern for the winter time period is indicative of how larger US carriers approach the Cancun market with an offering that mirrors Allegiant’s overall service strategy. But with Allegiant’s model of offering travel packages that include hotels and activities, Cancun and Cabo should prove to be viable for the carrier as it aims to broaden into near-international destination and leisure markets.

Allegiant also concludes much demand exists between Mexico and its large bases in Las Vegas and Orlando, Mr Bricker explained. It is not clear if Allegiant would offer flights from smaller Mexican destinations into its large bases or initially launch service from larger markets within Mexico.

Las Vegas is already one of the most popular destinations among Mexican carriers. Current schedules show that Aeromexico offers flights to Mexico City and Monterrey, Volaris to Guadalajara and Mexico City and VivAerobus to Monterrey. But there is opportunity for expansion in the Las Vegas-Mexico market as the void left by Mexicana, which had a large operation at Las Vegas and was by far the largest Mexican carrier at the airport prior to its Aug-2010 collapse, has not been completely filled. Allegiant has a potential advantage over other carriers looking to fill this void given its long-standing ties in Las Vegas.

There is also potential opportunities for Allegiant in the US-Mexico market from Orlando. Aeromexico and Volaris now serve Orlando from Mexico City after Volaris introduced service on the route in Jul-2012. JetBlue also operates flights from Orlando to Cancun. Given Orlando’s large leisure base and its ability to create vacation packages for travellers, Allegiant should have an advantage in the fast-growing Orlando-Mexico market. But in the cases of both Las Vegas and Orlando, Allegiant will need to make an investment in creating brand awareness within Mexico if it intends to branch out and capture point of sale traffic in Mexico. Allegiant, which currently only operates domestically, will also have to invest in several areas to support the launch of international services.

Allegiant continues to manage to keep competition with other airlines at a minimum in the US domestic market even as more airlines begin to serve one of its largest bases in Phoenix. But as it looks to launch transborder service into Mexico, it could experience a bit more competition than it is used to from other airlines and package operators that have a significant presence in Mexican resort destinations. Even though Allegiant has been serving Hawaii for roughly four months, Mexico will offer the company its first chance to apply its strategy on a truly international scale.