Allegiant Travel Co, parent of Allegiant Airlines, has achieved an extremely rare feat in today’s aviation market – setting a record high on the stock market. The carrier’s shares closed 10.8% higher after hitting in the record intra-day high yesterday as investors prepare for a strong set of numbers when the carrier reports its earnings on 22-Ap-09.

An operating margin close to 20% in the first quarter is widely expected – a figure most airlines around the world can only dream of. Allegiant’s success is built on its simple business model of operating a single fleet type of used MD-83s in a high-density configuration to key leisure destinations in Florida, as well as Las Vegas.

Meanwhile, TAM’s shares rose 10.9% as Brazil’s civil aviation agency confirmed the airline’s traffic increased 3.4% in Mar-2009 against a 1.8% drop for all Brazilian airlines, resulting in a handsome increase in TAM’s market share. 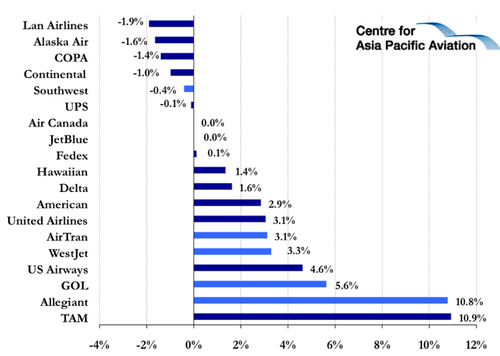