Jesup Lamont added that it expects Allegiant to report notable increases in jet fuel costs, pressuring operating margins, which are expected to fall to 17% in 1Q2010 (compared to 31% in 1Q2009). Shares in Allegiant gained 2.7% yesterday. See related report: Allegiant's Hawaii move a good one, but not until next year

During 1Q2010, total unit revenues are up in the 3.5-4.5% range, with double-digit improvements expected in Mar-2010 and into 2Q2010. The carrier added that through the deferral and/or sale of 47 aircraft from its 2008-2011 fleet plan, it has reduced aircraft spending by nearly USD1 billion through 2010. The carrier also has no permanent financing requirements until 1Q2011, with the LCC planning to maintain its fleet at 138 aircraft in 2010 (down from a previously planned 175 aircraft).

AirTran (shares down 3.3% yesterday) added that weather-related flight cancellation resulted in USD5-6 million in lost revenues for the carrier, due to the cancellation of over 1,400 services over an eight-to-ten week period. Southwest has reported an estimated USD15 million reduction in revenues, while Continental, US Airways and United Airlines have estimated losses of USD25 million, USD30 million and USD40 million, respectively. See related report: Weather costs keep on mounting for US airlines

In the Canadian market, WestJet Airlines (shares down 0.2%) unveiled two long-delayed credit card and frequent-flyer programmes with Royal Bank of Canada and MasterCard on 08-Mar-2010, with the carrier also offering a programme for passengers who spend more than CAD1,500 p/a on WestJet services.

The programme was previously scheduled to be launched in Jun-2009, but was delayed due to a challenging reservation system switchover for the carrier. The carrier stated that with the new system, "WestJet's going to be in a position to earn quite a bit more [in terms of] incremental revenues." Air Canada's loyalty programme, Aeroplan, currently has more than six million members. 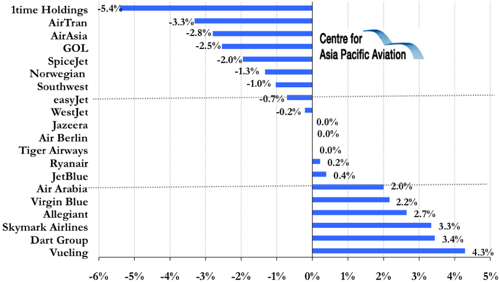