North and South American airline stocks were mixed on Monday (24-May-2010) as the Dow (-1.2%) fell to its lowest level in three months. The market was down on the seizure of a Spanish bank and rising borrowing costs, leading to continued concerns about the global economic recovery.

Allegiant Travel Company (-2.8%) stock fell the most after announcing that, due to adverse market conditions, it has elected to discontinue the private offering of senior unsecured notes, which the company had announced last week.

Republic Airways (-2.1%) was also down, despite news Fly Smart executives are reportedly in the midst of raising USD40 million in capital for the purchase of Frontier Airlines subsidiary, Lynx Airline, and the acquisition of the carrier’s aircraft. Republic Airways, parent of Frontier, announced plans in Feb-2010 to shut down Lynx’s operations. Fly Smart will utilise Lynx’s feeder service to Frontier Airlines’ services to provide services to five Wyoming communities including Sheridan, Cody, Riverton, Laramie and Casper.

Continental confirms it has signed merger agreement with United

Continental Airlines (-0.9%) slipped, despite confirming during trading that it has signed a definitive merger agreement with United Airlines (-1.4%) and anticipates it will gain regulatory and governmental approval later in 2010. Integration between the carriers is expected to be completed in 1Q2012 or 2Q2012. The carrier expects the impact on front-line employees to be “minimal” with staff reductions to come through retirements, attrition and voluntary programmes.

Also during trading, the US Subcommittee on Antitrust, Competition Policy and Consumer Rights announced plans to examine the proposed merger on 27-May-2010. 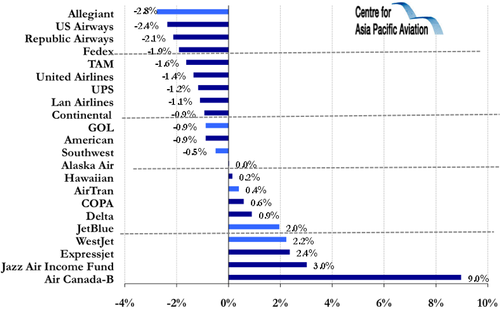