Citing rising fuel costs, Allegiant Travel Company is cutting back utilisation driving operating costs up as it continues to focus on two operating initiatives for 2011: increases the MD-80 seat count to 166 and integrating the 757 into its fleet.

While operating revenues rose 18.9% and 20.3% for the year and the fourth quarter to USD663.6 million and USD162 million, respectively, its operating margin for the two periods dropped 6.1 points for the full year to 15.8% and 0.5 points to 12.9% for the quarter. While those margins are impressive compared with its legacy and low-cost peers, they are still well below the ambitious 20% target.

While CEO Maury Gallagher focused on the company’s delivery of its 32nd consecutive profitable quarter and eighth year of profitability, rising costs will further exacerbate the cost picture.

“Our USD105 million operating profit translated into USD66 million of net income and just short of USD140 million of EBITDA for the year,” he said. “The substantial increase in jet fuel prices which peaked during the last two weeks of the quarter weighed on the quarter's results. In three months our scheduled service cost per gallon increased almost 11% USD2.61. If we had maintained our third quarter unit fuel cost, our operating margin would have approached 17%. In spite of this, we were able to grow earnings per share by 23% compared to last year's fourth quarter.” 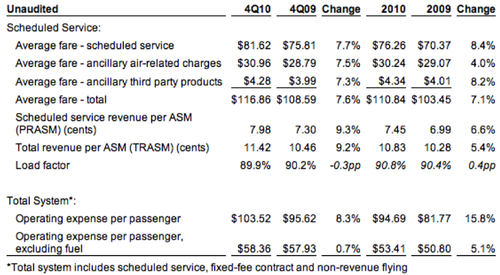 "Our increased emphasis on our third party business continues to pay dividends,” President Andrew Levy told analysts. “During the fourth quarter, gross revenues from third-party products increased 10%, but net revenues were up by 24%, reflecting improved profitability. Full year gross revenues approached USD90 million, an increase of 22%, while net revenues increased by 24% to USD24.4 million. Our third-party business continues to be an important area of focus for the company and we expect to maintain momentum with our recent advertising campaign emphasizing the value of bundled packages.”

While aircraft lease and rentals dropped most other expense metrics climbed for both the quarter and the year. The company cited higher labour costs given new contracts cut last year with cockpit and cabin crews.

“Our average fare, air-related and third party ancillaries all increased by more than 7% even with a 14% increase in capacity,” President Andrew Levy told analysts yesterday. “The revenue strength we experienced during the fourth quarter has continued into 2011 and while we are pleased with our revenue performance, we are wary of the accelerating climb in jet fuel prices we have seen in the last six weeks. Our capacity plan for the first half of 2011 had already reflected a slowing growth rate, but we have now reduced our growth even further, particularly for the second quarter. We now expect second quarter scheduled capacity to range from flat to up 4% year over year.”

The slower growth rate will exacerbate the cost equation driving increased unit costs. "But less capacity gives us the opportunity to increase fares and attempt to pass on the higher costs of fuel to our customers,” Levy continued. “In addition to added cost pressure due to our decision to lower utilisation, we are projecting a substantial increase in engine maintenance for the first half of the year due to several planned engine overhaul events.” 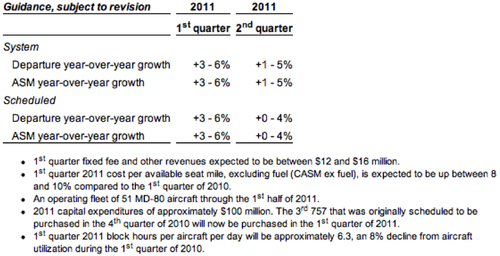