The two airlines that have expanded and prospered while many others faltered and contracted back into their shells are at last going to meet head to head. Allegiant and AirTran are the shining models that find hard times very much to their liking.

Each has expanded aggressively over the past two years. Allegiant, coming off a much smaller base, has shown explosive growth.

With its much larger profile, AirTran has been more cautious in its recent expansion, eschewing growth in size for profit growth. 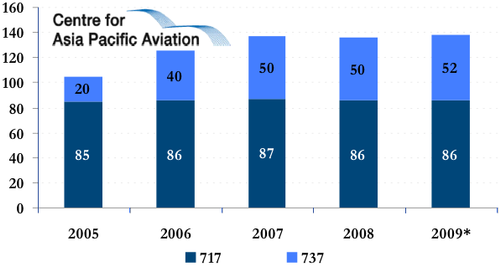 AirTran’s operating margins as a consequence have continued to rise in recent quarters, while Allegiant retains industry-leading margins, peaking in 1Q2009 at above 30%.

While other low cost carriers pursue a larger portion of the business travel market, Allegiant Air stubbornly sticks to its mission serving leisure travellers from underserved points to major leisure destinations. Its pure leisure profile means that Allegiant has been able to expand beneath the radar of most of its competitors, serving smaller ports (and, of course, Las Vegas). With its aggressive approach to online sales, this profile enhances the carrier’s ability to sell hotels and car rentals; Allegiant has the highest proportion of ancillary revenue of any airline in the world at around one third of total.

The carrier differs most from the conventional modern low cost airline in that, although high density configuration is a feature, it operates older, fuel thirsty aircraft, planning to continue to add MD-80 aircraft to its fleet at “attractive prices” without the need for external financing, as it opportunistically acquires aircraft, engines and parts. Allegiant has previously stated that it can purchase and refurbish its MD-80 aircraft for as little as USD4 million. The carrier recently bought six aircraft from Finnair, apparently to use for parts, and could be a potential customer for American Airlines’ large MD-80 fleet that will be progressively be retired.

While the aircraft are less fuel-efficient than newer types, Allegiant is able to purchase them outright for one-tenth the cost of a new B737 aircraft, and because of the low cost of ownership, operate at much lower utilisation (seven hours per day versus 13 hours per day at JetBlue), which helps keep costs lower.

This strategy has, not coincidentally, tended to keep it apart from direct competition with the bigger low cost airlines. But expansion means Allegiant is now increasing competition with AirTran Airways. Allegiant has served AirTran’s Orlando headquarters from Orlando Sanford Airport, where it dominates the facility. But Allegiant is now moving over to Orlando International Airport (MCO), citing passenger preference, last week announcing ten new cities from the main Orlando airport.

Thus Allegiant will either directly or closely compete – within an easy drive – of AirTran’s service.

AirTran is not about to take a backward step

Still, AirTran has proven its mettle by standing firm against Delta at Atlanta and many others at Orlando International. The airport is a competitive place, with no-one dominating: 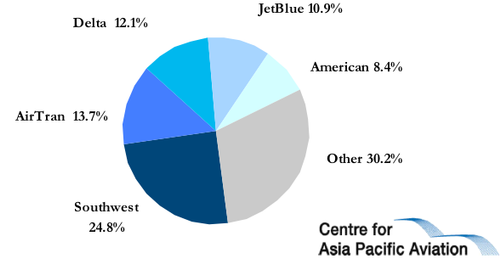 But Orlando is a key market for AirTran. After Atlanta, it is its busiest airport.

*The table shows the carrier's share in each of the markets

Orlando (Sanford) is also very important for Allegiant. After its home base, Orlando is its most important operation.

AirTran is also well capable of holding its own while expanding to other hubs such as Milwaukee, where it now competes not only with ailing home-town carrier Midwest Airlines, but also, again, Southwest.

It is putting six out of seven new routes of its 7% capacity expansion into Milwaukee. In addition, it has managed to stare down Northwest at Minneapolis, Detroit and Memphis.

So Allegiant will not wreak terror in AirTran management’s hearts. It will however be probably only the first of many future crossings of the way for the two airlines.