Not one publicly listed LCC posted a gain on Tuesday 23-Nov-2010. A nightmarish combination of unexpected geopolitical conflict on the Korean peninsula, contagion fears in the EU and Chinese rate hikes dragged down markets as investors shied away from riskier assets, such as airline stocks.

Led by GOL (-4.8%), US-listed LCC stocks all closed lower. GOL shares were lower on news Brazilian airlines won't be able to overbook flights during the holiday season under a Brazilian accord to improve the air travel experience. Rival TAM also closed lower (-2.3%).

European LCCs all down, led by Norwegian

News out of Korea soured the already fragile investor sentiment in the EU, as contagion fears continue to grow in the Union. All LCC shares followed European markets into the red.

Norwegian (-3.7%) was down sharply, as was Vueling (-3.2%), which suffered after a pronounced sell-off in equities in high-risk Spain. Shares in airberlin (-3.6%) were weaker despite a Frankfurt court announcing a temporary injunction preventing a strike planned by the Vereinigung Cockpit union for 24-Nov-2010. A weakening of the euro, which fell 1.9% yesterday to USD1.3372, did not help European LCC shares. 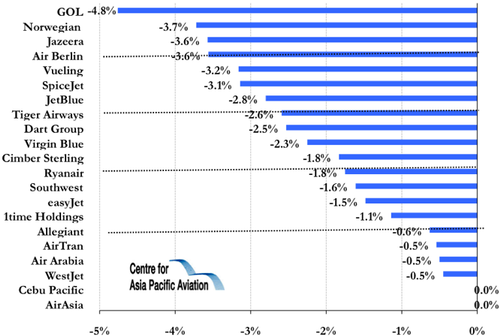