Allegiant's net profit of USD17.6 million dropped 26.4% during the second quarter even as revenues rose 13.8% to USD168.4 million. Its operating margin – 25.5% in the year-ago quarter tumbled 8.8 points to 16.7% as fuel prices rose. The LCC has announced it is pulling back in order to get back to its 20% operating margin goal.

"While we are slowing down our planned growth for the second half of the year, especially during the 4th quarter, as you can see from the guidance, we will still grow at a brisk pace,” said President Andrew Levy. “However, it is worth noting that the majority of our growth is associated with the extension of our network into new routes as opposed to simply adding capacity in existing markets. Over the years, we have been able to expand our network very profitably by adding more small cities and connecting the dots between existing small city markets and destinations we already serve. We will be growing in both ways during the 4th quarter and new service announcements are forthcoming in the next few weeks."

Chair and CEO Maurice Gallagher noted 2Q2010 was the company’s 30th consecutive profitable quarter and seventh in a row with double digit operating and pre-tax margins. “A critical component of our performance this quarter was the continued improvement in our unit revenues compared to the second quarter 2009,” he said. “All revenue metrics for scheduled service increased year over year, including both our average scheduled service and ancillary fares, TRASM and load factor."

The company cited fuel as the major culprit, and, were it not for that, operating expense per passenger would have risen only 9.1% to USD50.61 on an increase in average stage length according to President Andrew Levy. The company does not hedge because, as it said several quarters ago, “it just doesn’t understand it.”

"Fuel expense has increased substantially year over year," Gallagher continued, "Since Q2 last year, we have seen our scheduled service fuel cost per gallon increase USD0.64 or 36% to USD2.42. Sequentially, we saw a 4% increase from the first quarter 2010. Revenues, while up nicely year over year, did not keep pace with the rise in fuel prices which resulted in an operating margin below our 20% goal and down from our performance in the second quarter of 2009. At the moment, we see a stable revenue environment and the futures curve for jet fuel implies stable jet fuel prices through the back half of the year. As such, we will slow our planned growth and we now plan to operate 51 MD80 aircraft by year end, one more than we currently operate and one less than we had previously anticipated."

The company will have nine owned MD80s in storage by the end of the third quarter. "These aircraft will fund our MD80 growth needs through 2011 and 2012,” he said, adding efforts to certify operations with the B757 for its Hawaii expansion are on track for introduction in the first half of 2011. Fleet in use rose 16% from the year-ago period or seven aircraft.

Levy turned to cost management calling it “relatively good.” However, its “other” costs jumped sharply – 36%. “This category includes a variety of expenses, but if we remove expenses associated with non-recurring projects including our intended debt offering, B757 and large IT projects, the cost increase would be only 13.8%, consistent with our growth in revenue,” said Levy. “Nonetheless, we will have ongoing investments the remainder of the year in our B757 effort as well as the changeover we are undergoing in IT. We will continue to be vigilant and focused on maintaining the very substantial cost advantage we enjoy as compared with other low cost carriers in the US marketplace."

Levy also reported that efforts to grow third-party revenue were paying off. "This quarter saw the first concrete results stemming from these efforts,” he said. “Our net revenues were $7.2 million, or almost 26% of our income before taxes, up almost 33% year over year. This increase was driven by a 28% increase in our gross revenues as well as an improvement in our gross margins to 27.7% from 26.7%. Our third party ancillary revenue per passenger increased to $4.87, up 24.5% and the highest it has been in any quarter since 4Q-2008." Total ancillary revenues rose 14% to USD50 million.

While it strengthens its Las Vegas hotel franchise, Allegiant reported substantial growth elsewhere, most notably, Florida. “We also are seeing meaningful increases in our transportation segment,” he added. “We expect this momentum to continue and are very excited about the growth prospects of this business segment, especially after our automation projects are completed and our planned entrance into the Hawaii market next year."

Allegiant is the top ranked carrier globally in terms of ancillary revenue as a proportion of total revenue at 29.1% in 2009 (up from 22.7% in 2008), according to the Amadeus Ancillary Revenue Guide by IdeaWorks.

Top 10 Airlines – Ancillary Revenue as a % of Total Revenue 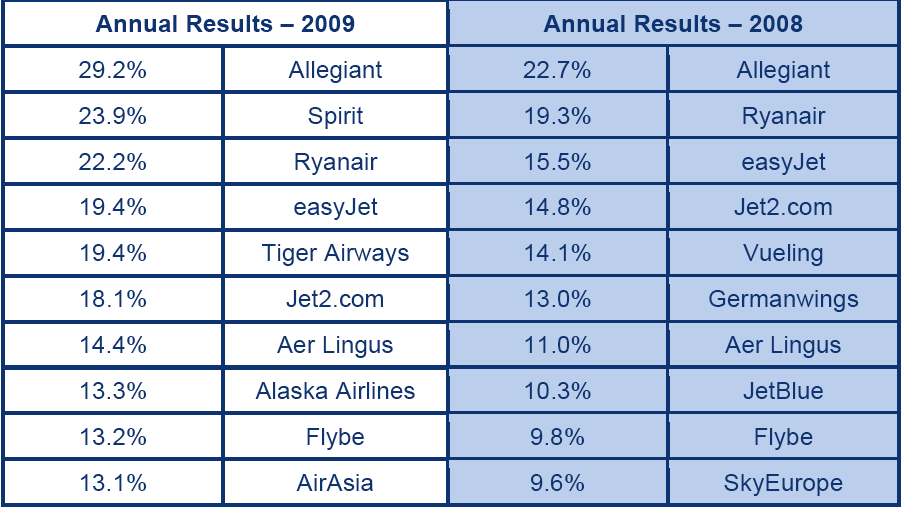 Allegiant ended the quarter with unrestricted cash and short-term investments of USD185.4 million, down from USD249.2 million at the end of the prior quarter while total debt outstanding, including capital leases, declined to USD34.1 million from USD39.4 million, according to CFO Scott Sheldon. “We used our balance sheet for several opportunistic deals, including a previously disclosed agreement for access to hotel inventory with one of our key Las Vegas hotel partners,” he said. “We also spent USD19.3 million in capital expenditures to acquire six MD80 aircraft, spare engines and parts."

In a continuation of its share repurchasing program, the company made made open-market purchases of 197,046 shares at an average per-share price of USD52.18 in the second quarter, for total consideration of USD10.3 million. Unused repurchase authority stands at USD11.9 million.

"Due to our ability to generate strong cash flows from operations and in an effort to return additional value to shareholders, the company declared a cash dividend of $0.75 per share during the second quarter 2010 resulting in a cash payment of $14.9 million,” Sheldon continued. “We will continue to evaluate ways to give excess cash back to our shareholders while continuing to grow our business at a reasonable pace.”

Third quarter fixed fee revenues are expected to drop between 22-26% year on year, while operating expenses per passenger, ex fuel, will be between USD52 and USD54. Cap ex for 2010 is about USD115 million, including the USD65 million spent in the first half.