As a measure of how the restructuring work of the past three years has worked, Alaska Air Group posted a 4Q2009 net income of USD24.1 million, nearly a USD100 million swing from the year-ago period when it lost USD75.2 million. For the year the company reported 2009 net income of USD121.6 million, compared to a net loss of USD135.9 million in 2008, thanks to a 38%, or a USD460 million decline in economic fuel costs.

Special items conspired to dampen the results, but both periods came in positive with 4Q net income at USD4.4 million, down from the USD16.4 million posted in 4Q2008. For the year, profits came in at USD88.7 million, a USD84.3 million improvement from the year-ago period.

Alaska Air Group Chair, Bill Ayer, reported that while 2009 had plenty of challenges, it also contained opportunities as the carrier worked on revenue optimization initiatives, reduced and redeployed capacity to meet demand to ensure Alaska and Horizon were operationally strong. He noted that if Horizon reported to the Department of Transportation, it would have led the industry in performance. The carrier also reached agreements on new contracts with Alaska pilots, mechanics and ramp agents as well as Horizon’s dispatchers and flight attendants at both airlines.

Those agreements afford increased productivity and allow for future cost savings. As part of the company’s incentive plans, Alaska and Horizon employees earned USD76 million for the year, a key strategy in all its efforts.

Executive VP Finance, Glenn Johnson, added that the fourth quarter was the first time during 2009 that it experienced a year-on-year decline in pre-tax profits, owing to a USD61 million increase in non-fuel costs, pension increases and increases in the incentive pay as well as higher pilots costs resulting from a new contract. He also said that economic fuel costs were USD25 million lower in 2009 than 2008, the smallest year-on-year decline of any quarter. He pointed out that group revenues were up USD19 million or 2.3% compared to 2008.

Johnson cited four main drivers for the fact that non-fuel costs came in USD10 million higher than guidance. He indicated that the company made its final adjustment on its employee incentive pay rules which allows employees to share in the profits. In addition, he cited higher than expected employee health care and the write-off costs associated with discontinued capital projects. In addition, the company experienced higher costs associated with environmental remediation, legal costs and winter operations.

The results made for an Air Group pretax margin of 4.4% compared to 4Q2008 when it was about negative 8%. The group also had a return on invested capital of 6%, Executive Vice President Finance for the group Glenn Johnson reported. 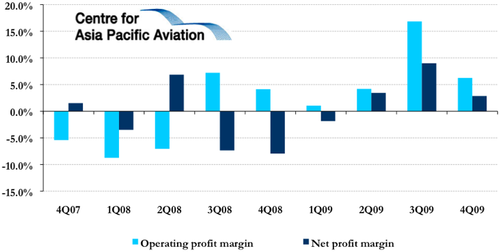 Johnson explained the incentive programs were relatively new and designed to “create a virtuous cycle” of employee participation in achieving goals and profiting from their work. “Alignment of employees and our goals is critical,” he told analysts. “Frankly, disenfranchised employees have been a problem in our industry for a long time. Our job is to get value out of the investment we make in making these programs work.”

The company’s Performance-Based Program (PBP), he explained, is based on goals set by the board in the fall and is designed to align employee actions on safety, customer satisfaction and unit costs. Each of these factors is weighted at 10%. Achieving goals toward profitability is weighted at 70%. “If we achieve our targets the majority of employees earn an incentive bonus of 5% of pay,” he explained. “If we exceed the goals, employees have an opportunity to earn up to maximum 10% of pay. And, if we miss our goals, there is no payout. At target, our PBP would pay USD35 million per year compared to the USD58 million paid this year which correlates to about 8% of pay since we were between the target and the max levels set by the board.”

Johnson also said there is a monthly program called the Operational Rewards Program, in which every employee participates which allows a payout of up to USD50 per month when they achieve customer satisfaction and USD50 per month for on-time goals. “In 2010, we are budgeting for the PBP and the traditional profit sharing we are pledging incentive pay at USD50 million compared to USD76 million in 2009 when we exceeded goals,” he said. “That represents a USD25 million reduction from 2009. Recognize this year is higher than expected, and at 10% ROIC income level, if we were paying at target that represents 15% of profits, which we believe is a good investment to ensure alignment.”

Turning to the balance sheet, Johnson reported the company had USD1.2 billion in cash or 35% of revenues, which represented an increase of USD115 million over year-end 2008. It generated USD305 million in cash flow from operations, while proceeds from financings reached USD500 million. Offsetting these inflows was cap ex at USD440 million, including USD261 million in debt repayments and USD24 million in share repurchase programs.

“We recognize, with the goal of 10% ROIC, our current level of cash creates a headwind,” he concluded. “Assuming a relatively stable environment stays intact, we plan to reduce our cash balances in 2010 and 2011 for debt repayments, share repurchase and pension contributions or a combination of all three. We also intend to pay cash for the four 737s planned for delivery in 2010. Our longer term target for cash to revenue is in the 25-30% range vs 35% today with a debt to capital ratio, including leases at less than 70/30 compared to the 76/24 today.”

Cap ex which was lower in 2009 than either 2007 or 2008 is expected to decline further this year after the company revised delivery schedules with both Boeing and Bombardier. “We will take four 737s this year and three in 2011,” he said. “There will be no new Q400s in either year and we are forecasting cap ex at USD270 million.”

“We have a good revenue story,” he said, “but costs need our urgent attention. We ended the year with CASM ex fuel of 8.26 cents, up 10% on the prior year on a 4.4% decline in capacity and 2.4% over initial guidance. The reasons include USD45 million in pensions, USD46 million in incentive payments and USD25 million in increased pilot costs which are part of their new contract. We also didn’t sell four aircraft as we had planned and had contract extensions for three other groups. While we can explain this, it is disheartening to see cost go up after so much work over the last three years. We will turn this trend around We know our future dependent on low fares and we have to have low costs. We will redouble our focus on costs and help everyone understand that low overhead and high productivity are the two key levers to provide customer great value, allow us to grow the company and create a long term future for our employees and our investors.”

Tilden reported that the company continues to reduce costs and control management overhead, real estate footprints and increase productivity having set aggressive production targets. “We will use daily metrics for everything from overtime, flight-crew-reserve utilization, reservation calls for employees, hours incurred per day for maintenance checks,” he said. “We are pushing that down to front line supervisors to translate our need for lower CASM to understanding the metrics and clear action for each work group.”

He also said the company was firming up its full-year CASM estimates and had targeted 8 cents, 3% lower than 2009 on a 2% increase in ASMs. “That means non-fuel costs are forecast to be USD1.89 billion down USD20million from 2009. That will include USD28 million reduction in retirement expense, a USD20 million reduction in PBP, significant productivity improvents and host of other non-fuel costs. He explained the 2% ASM boost result from gauge and stage-length changes since the fleet would actually be down two units.

“Alaska mainline passenger revenues were up USD8 million or 1% for the quarter which can from a 2.8% decline in passenger unit revenues offset by a 1.5% increase in capacity. “Our 2.8 compares favorably to the domestic industry which posted a decline of 6.9% for the quarter. For the year the decline was 3.5% versus 11.5% for the industry.”

The first bag fee contributed USD20 million for the airlines and USD25 for the entire air group for a total of USD47 million for the full year, Tilden reported, adding that that benefit is expected to continue through the first two quarters.

Tilden also reported operating PRASM was flat owing to changes to its mileage plan award levels and a new deal with its credit card companies. “We saw a load factor increase in each of the regions outside of Alaska,” Tilden reported. “We also had record load factors for both the quarter and the year of about 80%. In addition, we are seeing unit revenue improvement in Southern California, the Bay Area and Arizona/Nevada. Hawaii is encouraging although it has softened on added capacity and Mexico continues to be weak despite a 15% reduction in capacity.”

January and February advance booked load factors are up six points while March is up 3.5 points. Finally, he said that the fare sales during December, put in place to fill seats, had stimulated further booking strength in January. “Our booking curve is lengthening and we believe the yeidl declines will be offset by load factor increases,” he said. “We will see PRASM increases in 1Q2010 will be modest and due, in part, to the first bag fee.”

Alaska did not follow the industry with recent bag fee increases.

For the past three years, Alaska Airlines has been focusing on costs achieving goals to keep revenues ahead of costs. Air Group Chair Bill Ayer joked during the analyst call that emblazoned on their foreheads was a goal of 10% return on invested capital. 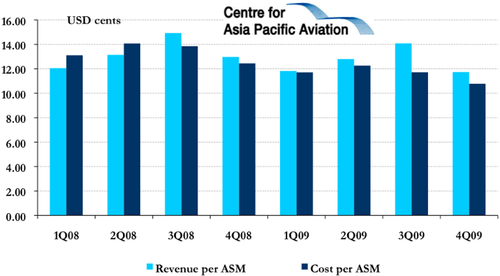 It wasn’t that long ago when analysts were asking Ayer if he should consider spinning off the regional airline subsidiary Horizon Air. He stayed the course and Horizon has been steadily improving on a well-managed recovery plan. Horizon’s operating revenues rose 4.8% to USD171.5 million in the quarter. Branded operations brought in USD98.2 million, a decline of 0.3% while Alaska flying increased 12.8% to USD70.5 million.

President Jeff Pinneo echoed the others, when he reported a laser focus on costs. He said adjusted pre-tax profit was USD2.3 million in the quarter compared to USD3.2 million in the year-ago quarter. For the full year it was USD7.7 million, marking a significant improvement over last year’s USD10.4 million loss. Pinneo also noted its 1.2% pre-tax margin fell well short of the company’s ROIC goals.

He noted that Horizon has retimed its fleet transition, reduced and reallocated capacity, reduced personnel and transitioned many functions to shared functions with Alaska.

4Q2009 unit costs ex fuel rose 6.6 on a 4.6% capacity growth with a new flight attendant contract and the inclusion of all non-union employees in the PBP resulted in a USD3.8 million in additional expense for the quarter. Horizon personnel is down 190 or 5.5%, which, he said, combined with a 4.2% increase in boardings to result in a 10.2% improvement in passenger per FTE.

Fourth quarter total revenue increased 4.8% or USD7.8 million which brand flying was down slightly on a 4.3% decline in capacity. Capacity purchase flying was up to 41% of its total business or 44% in the quarter. Capacity is forecast to be flat on a 2% decline in CASM ex fuel for the year. Advanced bookings were up five points in January, two in February and flat in March, but, said Pinneo, he expects that like Alaska strong loads will improve over all RASM.