Alaska Airlines (+13.4%) led the charge, after FTN Equity Capital Markets raised its 2009 profit outlook for the carrier to USD3.78 from USD3.06, stating Alaska Airlines has “consistently outperformed the industry this year in terms of unit revenue change," with the carrier’s yields and average fares decreasing approximately 6% in Jul-2009, compared to an industry average of 18.5%. The analyst expects passenger revenue for the carrier to decline 4% in 3Q2009 and 6% in 4Q2009.

Southwest (+2.5%) and WestJet (+1.2%) also gained, after Southwest announced plans to commence codesharing with the Canadian LCC in 2010. Expressjet (21.3%) also resumed its climb on the day, rebounding after losing over 12% on Monday..

GOL (-7.5%) stocks meanwhile slumped following an announcement of plans to raise up to BRL650 million (USD366 million) as part of a global offering of preferred shares. Fellow Brazillian carrier, TAM (-1.7%) stocks were also down. 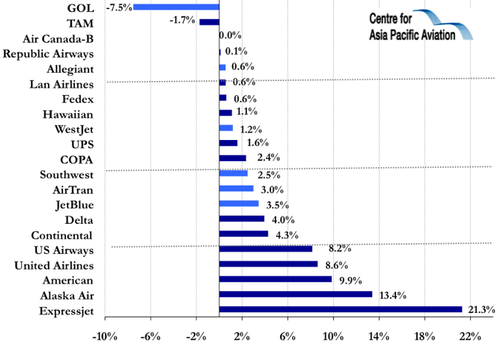