North and South American carrier stocks declined on Tuesday (13-Apr-2010), despite a small rise in the wider market and a slip in oil prices (-0.3%), to USD84.05. The AMEX Airline Index ended trading down 0.4% as a result. The Dow edged back into positive territory as investors remained upbeat as the earnings season commenced.

JetBlue (+8.0%) shares soared after the carrier reported a 17% year-on-year increase in PRASM for Mar-2010, compared to an estimated 1-3% increase in Feb-2010. Republic Airways (+3.0%) also gained after announcing Frontier Airlines will be the name for its consolidated branded network in favour of the Midwest Airlines brand.

Alaska Air (+0.4%) made another gain after SmarTrend stated it was bullish on the carrier’s stock, after trading near a new 52-week high the day prior, before closing at USD43.42.  The stock closed at USD43.59 on Tuesday.

The carrier’s shares have been gradually rising since mid-Feb-2010. 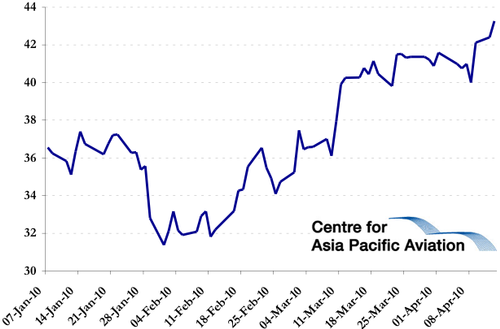 Elsewhere, Delta Air Lines (-3.8%) shares dropped back. The carrier announced during trading it has filed a filed a request for authorisation to implement a codeshare agreement with GOL (-2.6%). Expressjet (-3.2%) and Copa (-2.6%) were also down. Air Tran (+0.7%) gained.

Also during trading, Fitch Ratings published the Spring 2010 issue of Airline Credit Navigator, providing a overview of recent financial and credit quality trends in the US airline industry.

The company stated US carriers can "at last point to clear signs of recovery" in cash flow generation and balance sheet health following two years of extreme operating pressure in 2008 and 2009. However, US airline management teams remain cautious over capacity growth this year. Fitch will now focus primarily on the free cash flow generation performance of US carriers as the recovery takes hold in 2010. This is due to the "urgent importance" of balance sheet de-leveraging through the next industry demand cycle as the key to ratings improvement.

Fitch continues to see further industry consolidation as "a necessary and inevitable part of the US airline industry's effort to ensure more durable financial profiles through economic cycles". Renewed speculation surrounding potential mergers and industry consolidation reflects the "notable improvements in the industry operating outlook and the long-term logic of increased concentration in a largely commoditised industry that remains vulnerable to external demand and fuel price shocks". 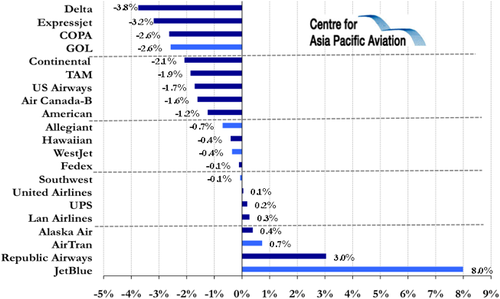