AirTran’s innovative challenge to Frontier at Milwaukee. Be charitable and join us

The majority of North and South American carriers’ shares were down on Friday (14-May-2010), pushed lower by the wider market. The Dow (-1.5%) fell on continued concerns over European debt issues, weak retailer earnings and Senate backing for a limit on credit card charges.

AirTran’s innovative challenge to Frontier at Milwaukee. Be charitable and join us.

Innovation has always been part of the success formula for the new breed of airline. As part of an effort to win Midwest Airlines frequent flyers, AirTran (-1.3%) is trying to look magnanimous in a new charitable scheme. In the first shot across Frontier’s (nee Midwest Airlines) bow, AirTran is tempting Midwest’s frequent fliers by suggesting they donate their Midwest miles to charity in exchange for matching credits in the AirTran frequent flyer programme.

The 30-day promotion would benefit the American Heart Association, Children's Hospital of Wisconsin, the MACC Fund and others. Those donating 50,000 miles by 14-Jun-2010 would get 32 A+ Rewards credits, or the equivalent of one round-trip business class ticket or two coach tickets. Donations of 100,000 Midwest Miles will net travelers 64 A+ Rewards credits, good for two round-trip Business Class tickets or four coach tickets. These credits are valid anywhere AirTran flies.

"As AirTran Airways continues our Milwaukee expansion, we are constantly looking for ways to be a good community partner and give travelers opportunities to not only enjoy our award-winning service but to join us in giving as well," said Kevin Healy, senior vice president of marketing and planning. "This special offer helps Milwaukee charities and provides even more incentive for Milwaukeeans to experience the low-cost, high-quality service that has propelled AirTran's growth in the region." And…..it also wins the hearts and minds of its competitor’s frequent fliers.

The first 100 people with confirmed donations of 100,000 Midwest Miles and a guest will be invited to this unique fan experience. In addition, AirTran is offering A+ Rewards Elite status to any Midwest Airlines Aspire or Executive status holders in Milwaukee.

The carrier announced plans during trading to shift its New York-Chicago services from Midway Airport to O’Hare Airport, effective 14-Jun-2010 allowing the carrier to compete directly with American Airlines (-1.7%) and United Airlines (-1.3%) for business travellers on the O’Hare-LaGuardia route. 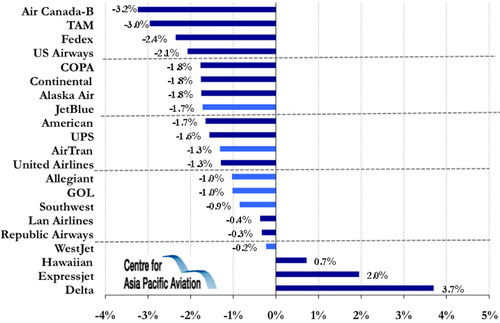