AirTran’s shares slipped 0.3% yesterday, as the carrier announced changes to its credit agreements to boost its cash position.

AirTran entered agreements with its principal credit facility lender and its largest credit card processor, respectively. As a result, AirTran expects to end the current quarter (30-Sep-2009) with more than USD400 million of unrestricted cash and short-term investments (compared to USD390 million as at 30-Jun-2009).

Also in North America, WestJet's shares slipped 0.5% on the same day the carrier announced the completion of its previously announced capital raising. An aggregate of 15.4 million shares were issued at a price of CAD11.20 per share for aggregate gross proceeds of approximately CAD172 million (USD161 million).

The LCC stated it intends to use the net proceeds of the offering to finance the company's capital expenditures, including future aircraft financing activities and pre-delivery payments on new aircraft, for general working capital purposes, and to maintain its capital position to enhance its flexibility for financing future growth activities.

easyJet model “more resilient, safer and lower risk” than Ryanair (according to easyJet)

Sir Stelios stated risk is a key factor for investors, who may be concerned with Ryanair's high growth strategy in the current environment.

Describing the current economic conditions, Sir Stelios stated, "the economy is a very Darwinian place. It is survival of the fittest. The airline industry in many ways is non-Darwinian because the dinosaurs won't die."

In the Asia Pacific region, AirAsia’s shares were up by 2.2% yesterday, while Virgin Blue gained 1.2% as the carrier’s CEO, Bretty Godfrey, stated improved consumer confidence may lead to fare increases by the end of the year. See related report: Virgin Blue believes market "starting to turn” 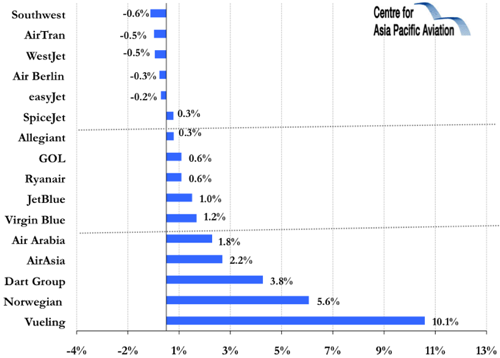