In other AirTran news, the LCC stated its customer service, ramp and Reservations agents have rejected representation by the International Association of Machinists (IAM). The National Mediation Board (NMB) notified the carrier that they have dismissed the IAM's petition for a representation election because the group failed to garner the required 35% of eligible agents to sign representation cards requesting an election.

Allegiant (shares up 4.3%), which has been robust throughout the global economic slowdown, saw its system passenger load factor slip for the sixth consecutive month in Nov-2009 (down 0.5 ppts), although it remains above 85% (at to 86.5%) and reflects the carrier’s massive 25.0% year-on-year increase in scheduled capacity (ASMs).

This increase comes at a time when the majority of US carriers are reducing capacity or only increasing capacity by single-digit levels. 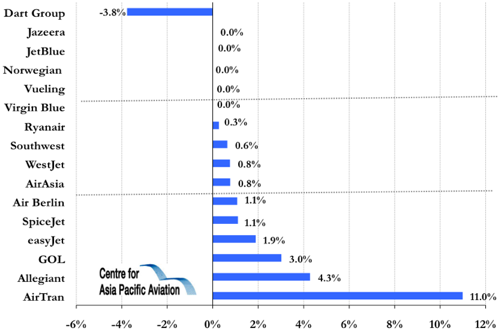 Also in the America, GOL’s shares gained 3.0% yesterday, as the benchmark Bovespa stocks index closed at a fresh 18-month high Wednesday on Government data showing robust industrial output (+2.2% in the month) in Oct-2009.

Ryanair to increase presence in Alicante

In Europe, Ryanair’s shares were up 0.3%. The carrier announced plans to base three new aircraft (for a total of nine), open seven new routes (56 in total) and handle an estimated 3 million passengers p/a at its Alicante, from Mar-2010.