AirTran’s shares gained 1.5% yesterday, upon the release of better-than-expected fourth quarter results, in which the carrier reported a net profit of USD17.1 million (compared to a loss of USD122 million in the previous corresponding period), to become one of only a handful of carriers to report a profit in every quarter of 2009.

For the full year, AirTran’s net profit of USD134.7 million, operating profit of USD177 million and load factor of 79.8% represented record results for the carrier.

Looking forward, AirTran expected to increase capacity by 3-4% in 2010 and 2-3% in 2011, with CEO, Robert Fornaro, commenting, "I think there are going to be some opportunities for us, but I think the days of double-digit growth or more for carriers of our size, you're just not going to see that happen".

Allegiant’s shares also gained yesterday, up 3.7%, after the carrier posted its 28th consecutive quarter of profitability in 4Q2009, with an operating profit of USD18.1 million (for an operating margin of 13.4%) and a net profit of USD10.5 million.

AirAsia X CEO, Azran Osman-Rani, in an interview with EyeforTravel, stated the carrier’s agenda for 2010 is “Growth! More planes, more destinations and more profits”. Mr Osman-Rani added that the carrier plans to reduce non-fuel operating costs by a further 18% in 2010, with the delivery of four new A330 aircraft during the year. Shares in parent, AirAsia Group, were down 4.4% yesterday. 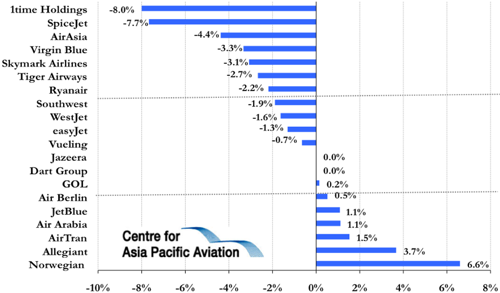