During trading on Friday, the US Department of Transportation assessed civil penalties against AirTran and Delta Air Lines for violating rules that require airline price advertisements to disclose the full price consumers must pay for air transportation. AirTran was fined USD20,000 and Delta USD40,000.

Last week, AirTran launched non-stop weekly Wichita Mid Continent-Orlando service, while Allegiant reportedly plans to discontinue its Monterey-San Diego service in Jul-2010 due to a lack of demand after launching the service in May-2009.

Also on Friday, SpiceJet announced preliminary talks with the US Export-Import Bank to finance the acquisition of two B737-800s during 2011-2012, which would add to its fleet of 20 leased B737s. Shares in the airline gained 3.7% on Friday. 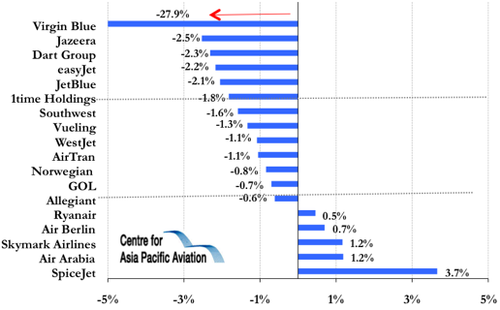