JetBlue, US Airways and Continental Airlines reported continued yield weakness in Oct-2009, with the carriers continuing to feel the effects of the challenging operating environment. Southwest was the exception in the month, reporting PRASM growth of approximately 1%.

Southwest trumps JetBlue, US Airways and Continental in the yield growth stakes

During 3Q2009, Southwest’s passenger yields, while slipping 12.0% to USD 12.94 (as discounting activity reduced the average passenger fare by 8.4% to USD113.95) were higher than the other LCCs, and even some of the network carriers. 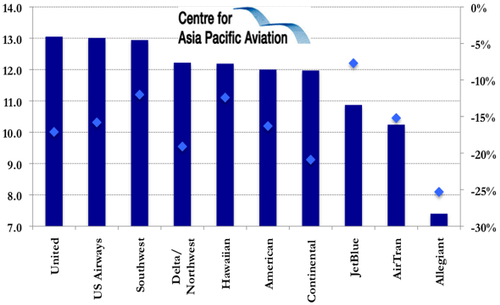 Load factor improvements across the board (with the exception of AirTran)

All but one of the eight US majors (with the exception of AirTran Airways) reported load factor improvements in Oct-2009, reflecting continued capacity reductions by the carriers and signs of a bottoming in demand.

Only AirTran, JetBlue and Allegiant on the growth path

JetBlue and AirTran were the only two carriers among the majors growing capacity in the month, while among the smaller carriers, Allegiant stood out, with its continued expansionist strategy, which saw the carrier increase scheduled service capacity by almost 40%.

Southwest stated it expects passenger revenue per ASM to have increased in the 1% range in Oct-2009 – for the second consecutive month of increases - thanks to large capacity cuts during the month. 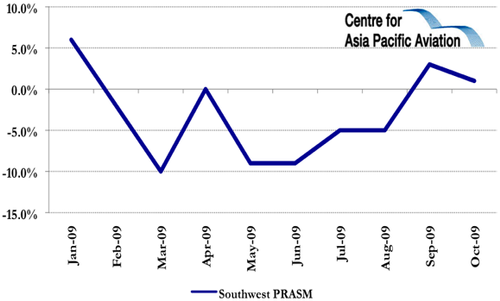 Southwest’s load factor gains were larger than its US counterparts, with seven of the nation’s eight largest carriers reporting improved load factor levels in Sep-2009. Southwest traditionally reports the lowest load factors among the major US airlines. 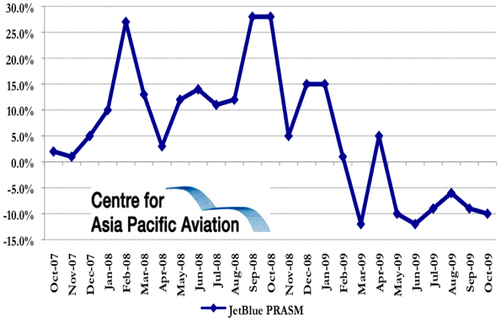 Also in the month, the carrier reported a 7.5% increase in revenue passenger numbers to 1.7 million, while load factors gained slightly (+0.1 ppts to 80.8%).

Continental Airlines yield contractions continue in Oct-2009, but on the improve

Continental Airlines’ yield contractions also continued in Oct-2009, for the tenth consecutive month of declines, the last nine of them double-digit, reflecting continued fare-cutting and weakness in premium travel.

For Oct-2009, the Houston-based carrier estimates that consolidated passenger revenue per available seat mile (RASM) was down by 14.0% to 15.0%  (mainline RASM down by 15-16%). This represents the smallest monthly contraction for the carrier in six months, since Apr-2009’s 13.1% decline (which was positively impacted by Easter falling in April this year, compared to March in 2008). 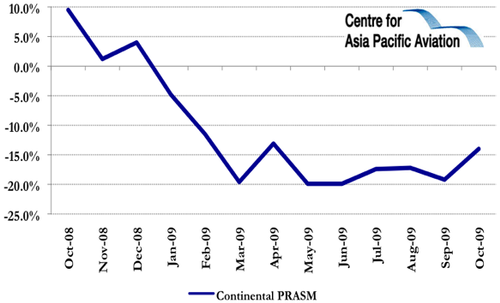 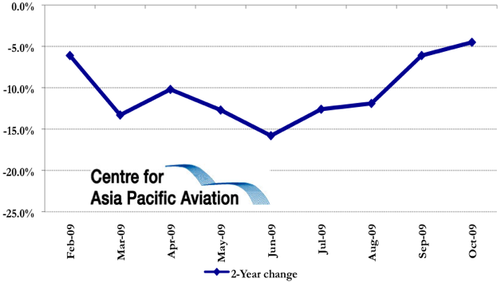 Domestic load factor of above 85% for Continental

In other traffic developments in the month, Continental Airlines’ reported a consolidated (mainline plus regional) load factor of 82.5%, a 3.5 ppt load factor improvement, with a mainline load factor of 83.0%, also up 3.5 ppts. Domestic load factors gained 2.4 ppts to 85.4%, for the highest load factor level among the majors (Only Allegiant, with its unique model, operated with a higher occupancy).

This signals a key shift in the airline model in the US: America’s full service airlines have pared back capacity so much that they are now consistently operating with higher load factors than their LCC competitors.

Comparatively, when LCCs first arrived on the scene, their keynote features were maximum utilisation of aircraft and of space, including a pricing model designed to deliver much fuller aircraft. 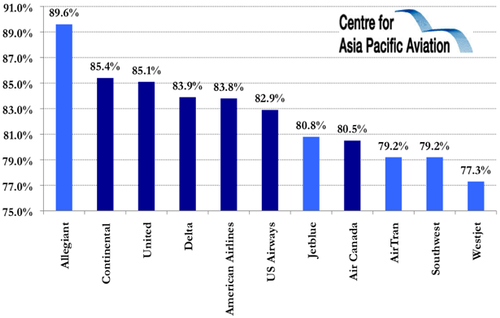 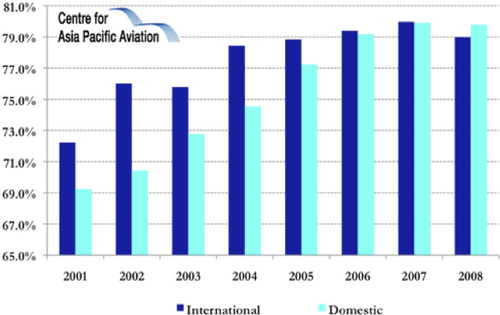 He added that the “revenue outlook continues to show material signs of improvement with continued strength in both close-in bookings and yields." 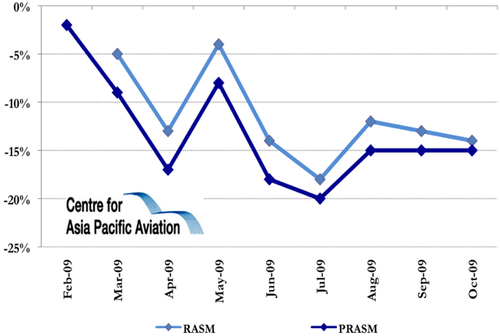 Also in the month, US Airways reported a 3.3% domestic traffic (RPMs) reduction, as the carrier reduced domestic capacity (ASMs) by 3.4%, resulting in a 0.1 ppt load factor improvement to 82.9%.

AirTran, meanwhile, reported that traffic (RPMs) and capacity (ASMs) represented new all-time records for the LCC for the month of October. The carrier reported a 1.2% increase in passenger levels in the month, to 2.0 million, while load factor slipped 1.3 ppts to 79.2%.

Allegiant, which has been robust throughout the global economic slowdown, saw its passenger load factor slip for the fifth consecutive month in Oct-2009, although it reflects the carrier’s massive 38.9% year-on-year increase in scheduled capacity (ASMs) (although this was lower than the 50-65% growth range experienced in the past three months). 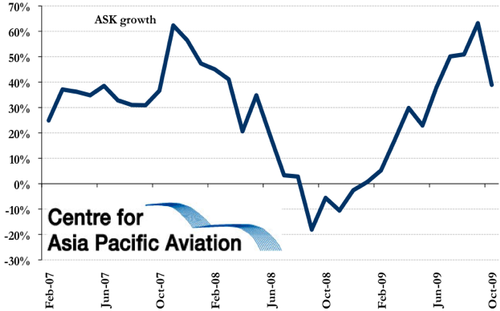 This increase comes at a time when the majority of US carriers are reducing capacity, with only JetBlue, AirTran and American Eagle increasing capacity in the month (all of which were under 10%). 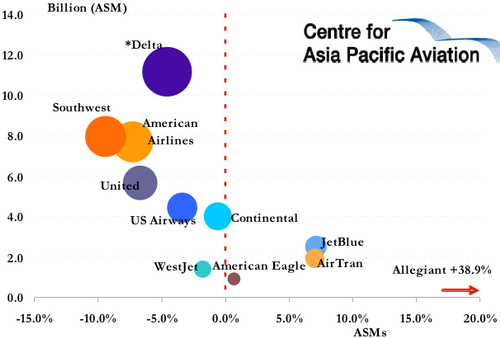 Allegiant’s scheduled service load factor declined 1.6 ppts in Oct-2009 to a still very solid 89.6%, with passenger numbers soaring 31.3% year-on-year to 319,980 (although this passenger figure is considerably lower than the major network and LCC carriers). 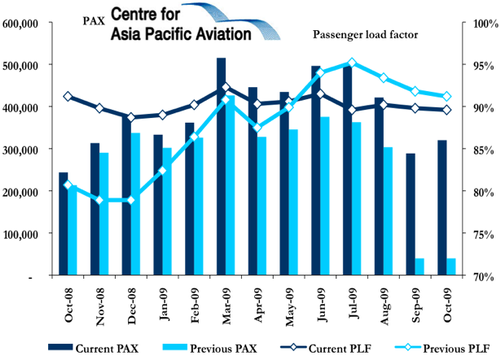 Rapid expansion while others contract

As ATA President and CEO, James C May, last month stated that the “demand for air travel remains weak, as evidenced by the untenable pricing environment”.

He added, “while other sectors may be seeing signs that the economy is getting back on track, the airline industry has faced challenges in its effort to generate revenue”.

Separately, but illustrating the same point, the BTS stated that the average domestic airfares in 2Q2009 fell to their lowest level since 1998, dropping 13% year-on-year, for the largest year-to-year decline on record.

The year-on-year traffic and yield weaknesses are expected to continue this month, with ATA, on 09-Nov-2009, stating that it expects a 4% year-on-year reduction in passenger numbers on US airlines during the 2009 Thanksgiving holiday season (20-Nov-2009 through 01-Dec-2009), even despite the deep discounting activity.

According to Mr May, “it increasingly apparent that the economic head winds facing the airlines and their customers are anything but behind us”.  He added, “as typical with the Thanksgiving holiday travel period, flights are likely to be quite full, driven this year by the decrease in available seats and deep discounting, rather than by robust demand”.

According to ATA, 2009 capacity reductions by US airlines have been the deepest since 1942. This careful capacity management, combined with opportunistic capital raising exercises, have however positioned the US airlines to survive the tough Winter that lies ahead. This capacity management has also meant that US airlines are operating at near record load factors, which is partially making up for reduced air fares.

However, according to ATA, while US airlines are now reporting improved load factors and are reducing costs (ATA stated its quarterly Airline Cost Index fell 29% to 183.9 in 2Q2009, for the second consecutive quarter of airline cost declines), there still exists an “unfavourable gap” between average break-even and actual load factors, currently at 1.8 ppts (from 6.3 ppts in the previous corresponding period).