Airports of Thailand, the Thai national airports operator, reported passenger traffic rose 5.2% year-on-year in Dec-2010, with Bangkok traffic up 3.3%. Aircraft movements in the country rose 8.3%, with movements up 7.4% in Bangkok. Air cargo volume was 125,559 tonnes, up 10.5%. AoT shares were unchanged in trading on Tuesday.

Mexican airport operator Grupo Aeroportuario del Pacfico (GAP) plans to invest USD84 million in maintenance and expansion of its airport network in Mexico in 2011, according to a Bloomberg report. The company expects to expand passenger volume by 3% to 4% in 2011; the number of passengers it transported grew 4.9% in 2009. GAP shares were up 0.2% yesterday, while ASUR and OMA both rose 0.1%.

Spanish airport and infrastructure companies also gained ground, with Abertis up 2.9% and Ferrovial 3.1% on a stronger IBEX. The Spanish Treasury sold EUR5.539 billion of 12-month and 18-month Treasury bills, helping the market, although average yields were down. Other European airports also rose, with Aeroports de Paris and Fraport both gaining 1%. 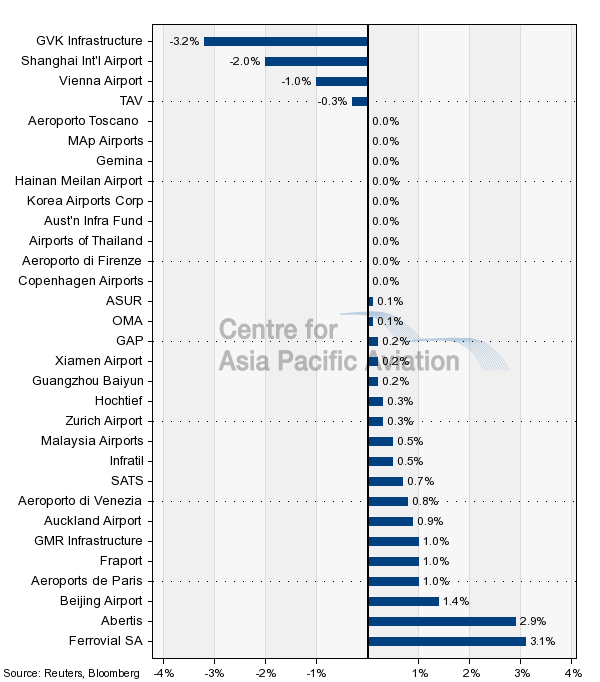