Airlines are becoming more optimistic about the outlook for yields, with a recent IATA survey of airline executives noting over three-quarters of respondents indicated that yields should increase over the coming year. IATA stated that further demand recovery, combined with capacity restraint, could “lend support to this pattern of improvement over the year ahead”, but added, “the risk remains of excess capacity re-entering the market once more and muting yield recovery”.

The industry body stated, “passenger yields may well have turned the corner, but further significant improvement will be needed before more normal yield levels are regained”, noting that the majority of respondents continued to experience year-on-year falls in passenger yields during 4Q2009.

IATA added that European airlines in particular “appear to be still facing extremely difficult conditions, with 80% of respondents from the region still reporting yield falls”. IATA Chief Economist, Brian Pearce, told Bloomberg that all Asian operators which responded expect an improvement in yields. Mr Pearce stated, “it’s a reflection of economic demand - European airlines have seen much less trade and travel being generated. If you look at industrial production in emerging economies it’s pretty much back to where we were pre-slump”.

Overall, and in contrast to the last survey, some airlines are beginning to experience improved yield performance, as indicated by almost one quarter of respondents. IATA stated, “lowering of fuel surcharges is the most often cited rationale for yield decreases. Weak demand is still part of the equation, although several respondents cite higher load factors as helping drive yield improvements where they have been seen so far”. 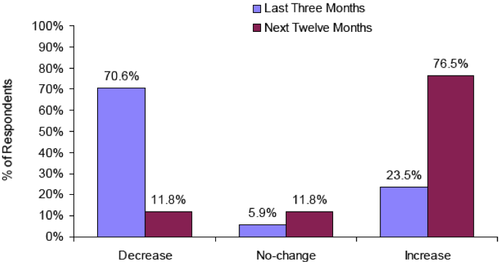 Cargo yields followed a similar pattern to passenger over the last three months, with a majority of respondents to the IATA survey still reporting falls relative to a year ago. However almost one third now report yield increases on the back of recovering demand and higher freight load factors.

Asian airlines – with greater exposure to cargo markets and benefiting from relatively stronger regional economic recovery – report better than average performance with just over half of the respondents from the region reporting cargo yield increases.

IATA concluded, “freight load factors have risen back to pre-recession levels and, if maintained, this should provide the market conditions for some improvement in yields during the year ahead”. 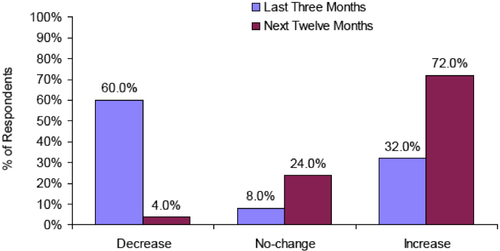 Costs continued to fall for the majority of respondents during the last three months. However almost a quarter reported ‘no change’, according to IATA.

Although many carriers are still benefiting from lower fuel costs and operational cost cutting measures, factors such as lower aircraft utilisation and upward pressure on infrastructure charges are “cited as dampening the continued downward trend”.

How have your unit input costs changed? How do you expect them to change over the next twelve months? : January 2010 survey

IATA added, “the persistent concern over rising fuel prices continues to shape the cost outlook, but higher airport & ANSP charges, maintenance costs and potential tightening of labour markets are added to the list”.

The employment situation in the industry may be stabilising after several quarters of retrenchment, according to the industry body. Some airlines are still cutting headcount in line with network restructuring and cost cutting, but others indicate that recruitment or salary freezes are being used to hold employment levels steady.

Looking ahead over the next 12 months, more respondents now indicate that employment level increases are likely than those foreseeing further cuts. However the more common outlook is for stability.

How has your employment level changed? How do you expect it to change over the next twelve months? : January 2010 survey 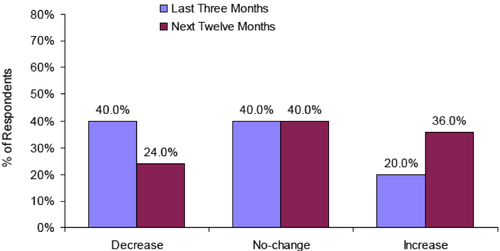 IATA reiterated that controlling and reducing costs “will be crucial if the industry is to minimise losses in the current revenue environment”.

On the outlook for overall profitability, IATA detected a divergence between “more positive Asian airlines and more pessimism among European airlines”. But, for the first time since Jan-2008, a majority of respondents stated profitability had improved in the previous quarter (4Q2009) and 76% expect profitability to improve over the next 12 months.

IATA’s own forecast predicts that airline net losses will halve from USD11 billion in 2009 to USD5.6 billion in 2010.

There was a particularly sharp improvement in both cargo and passenger demand during the previous quarter, with the majority of airlines switching from reporting declining demand to rising demand. Expectations for improvements in demand over 2010 have risen back to levels last seen in 2007, with over 82% of airlines expecting further gains in passenger demand and 72% expecting improved cargo demand. 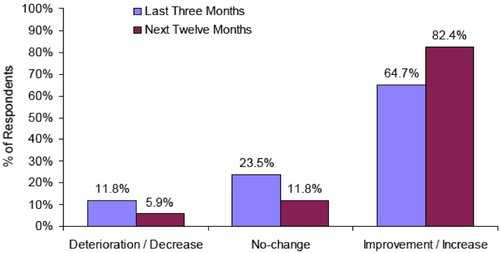 IATA concluded that the results of this quarter’s survey mark a “sharp improvement in the business environment for airlines”.

But the industry body hastened to add that the improvement is “from a very weak base, so although airlines expect the pace of improvement to be as strong as in 2007, it will still take many quarters before demand, yields and revenues recover to levels seen early in 2008, let alone catching up with the 2-3 years of growth lost due to the recession”.