Worldwide scheduled airline capacity increased 5% in Mar-2011, as it did in Feb-2011, while the number of flights increased 4% and the average number of seats per aircraft increased 1.3%. The total number of seats grew to 319.1 million and flights to 2.6 million, according to OAG.

Low-cost scheduled capacity increased 10% year-on-year, following growth of 9% in Feb-2011, with the most notable regional growth in terms of frequency being within Africa (35%) and to/from the Middle East (21%). 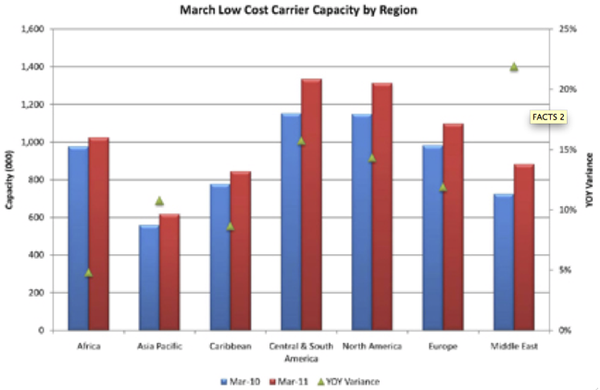 The fastest-growing market is to/from the Middle East, which recorded 13% increases in both the number of services and seats offered. Recent trends in frequency over the past four years to/from Middle East region show it has a clear lead with an average growth rate of 13%. This is followed by to/from Africa with 10% and to/from Asia Pacific with 8%. US, European and Gulf airline fleet deployment in the Asia Pacific region have driven this growth since 2003. 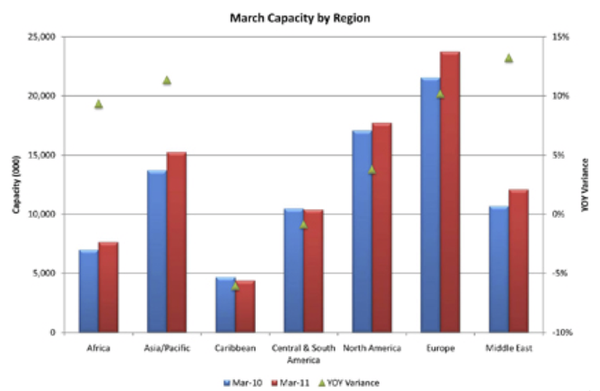 LCCs grew the number of services within Asia by 20% for 1Q2011.  Services by LCCs to/from the region grew by only 6%, indicating the more limited range that LCCs can operate to outside of Asia. Interestingly, LCCs grew their capacity to India by only 1%, whereas LCC frequencies on domestic services are planned to expand by 10% in 1Q2011.

Boeing this month predicted Asia Pacific will overtake North America and Europe as the world's largest air transport market over the next 20 years. "As we look to the future, we look to Asia. Growth in this market will clearly change the landscape of aviation," said Randy Tinseth, VP marketing for Boeing Commercial Airplanes. Boeing forecast that Asia would require 10,320 new aircraft over the next 20 years, or around a third of the world total. Air traffic growth is forecast at 6.8% p/a, higher than the global average of 5.3%.

Capacity to/from Beijing Capital Airport accounts for almost 8.0 million of the available seats in the region and marks the airport as the second largest in the world in scheduled capacity. Despite being slot constrained, Beijing Airport increased seats and frequencies by 3% in Mar-2011. Shanghai Airport recorded 17% growth in capacity and grew to a total of 4.6 million seats, a strong performance at another slot-constrained airport in China.

New routes and service restoration to Vancouver have helped push capacity growth between Beijing and the US and Canada, increasing 38%. This market segment is expected to continue to perform as a number of services by United, China Southern and Air China have yet to commence service.

All of the major North Asian hubs recorded double-digit capacity expansion to the US and Canada. Capacity between Asia and western Europe was equally positive, with a 10% rise in seats between the regions. Shanghai recorded growth of 15% in seat capacity, closely followed by Seoul with 12%.

Tokyo Haneda Airport, which moved ahead of London Heathrow in terms of scheduled capacity in Feb-2011, slipped behind it again in Mar-2011 to rank as the fourth largest airport in the world with capacity of 7.79 million. Heathrow has 7.89 scheduled seats in Mar-2011, aided by the introduction of the summer season, while Atlanta Hartsfield remains the largest airport in the world with 9.41 million.

Jakarta and Delhi Airports also show large gains in capacity, with growth of 25% and 23%, respectively.  Air India’s hub developments are clearly beneficial for the Indian airport and low-cost carrier expansion in Indonesia has boosted the numbers for Mar-2011.

Political events will undoubtedly affect performance in North Africa, with many services cancelled or suspended until more stable conditions prevail.

Leading up to the situation in North Africa, growth to/from the region has steadily increased with scheduled capacity in Mar-2011 growing 9% to 7.6 million. Scheduled seat capacity within the region grew 5% to 6.7 million seats.

LCCs have continued their expansion within North Africa, driving frequency growth by 294%, and 202% growth for the year-to-date. This will likely be affected by the political situation in key low-cost markets such as Egypt, Tunisia and Morocco.

One of the top segments to experience expansion in sub-Saharan Africa is Nairobi.  New capacity serving Nairobi to western Europe routes has driven up frequency growth by 12%, with capacity rising 15%. This expansion will continue as Kenya Airways plans to operate a new service to Paris as part of its Skyteam partnership with Air France/KLM.

Capacity increase in US continue to remain cautious

Capacity increases in the US continue to remain cautious. Domestic set capacity rose 3% in Mar-2011, and services to the US from international destinations delivered a capacity increase of 4%.

The exception is the US LCC sector, where airlines have scheduled a 6% increase in capacity on US domestic services as well as a 14% expansion on international routes. Latin American, Caribbean and Mexican routes were all candidates for JetBlue and AirTran expansion.

A number of US carriers have announced capacity growth reductions in recent weeks. Delta Air Lines last month downgraded its 1Q2011 capacity guidance to growth of 3-5%, down from forecasts of 5-7%.

American Airlines stated it would trim its capacity plans by 1ppt from the previous guidance as the industry tries to offset rising fuel costs with fewer flights and higher fares. The carrier, in Jan-2011, had stated that consolidated capacity would by 3.6% up from 2010 levels in 2011.

United Continental similarly stated it would downgrade growth plans and reduce capacity by around 1% from the May-2011 schedule and 4% from the Sep-2011 schedule. With those reductions, United said, its 2011 consolidated capacity will be roughly flat with 2010, but down from its prior forecast of an increase of 1% to 2%.  United expects its international capacity to grow by 2.5% to 3.5% this year and its domestic capacity to decline 1.5% to 2.5% from 2010. In Jan-2011, the largest airline said it expected its international capacity to increase 4.5% to 5.5% in 2011 and domestic capacity to shrink by 0.5% to 1.5%.

Southwest stated it would reassess its capacity plans when oil prices reached USD3.30/gallon. Jet fuel is trading near USD3/gallon at present.

International capacity to/from Central and South America was the only regional market not to record year-on-year growth in Mar-2011 with a 1% decline. This drop, however, is an improvement on Feb-2011 when the reduction was 3%.

Meanwhile, the Caribbean continues to suffer from retrenchments by carriers, as well as the legacy of last year’s route cuts and the Mexicana collapse. Seat capacity to the region is down 6%, and within the region is marginally down at 0.2%.  Little or no new aircraft deliveries to Caribbean carriers indicate little scope for regional seat production.

There are some positives. British Airways’ service to Cancun from Gatwick is scheduled to move from two to three times weekly for summer, and St Lucia and Trinidad (tagged service) both going daily, up from five times weekly.

As with the US, Europe records a 3% increase in capacity within the region. There is a 10% increase in the number of seats operating to/from Europe. The deployment of A380 aircraft onto more routes partially explains this rise.

Similar to the US, Europe is seeing LCCs expand. As with Feb-2010 figures, the main area of expansion is to markets to/from, rather than within Europe, with a 12% increase in seats by LCCs. Once again, Turkey was a key performer in this sector, with seat capacity rising 75% for 1Q2011 on international services, compared with the same period in 2010.

Low-cost seat expansion within Europe was a more modest 7%. All the major European economies are actually experiencing declines in domestic low-cost operations for 2011 - Germany is down 7%, France by 8%, and the UK is down 11%. Spain bucked this trend with a Ryanair-fuelled 11% increase on domestic operations.