Global air passenger traffic “bucked the gloomy economic outlook” with a surprisingly strong 5.9% year-on-year increase in Jul-2011, according to IATA director general and CEO Tony Tyler. Freight traffic, however, fell by 0.4% and freight load factors declined by 1.8 ppts to the pre-recession level of just 45.0%.

Commenting on the Jul-2011 performance and outlook, Mr Tyler said: “July is the peak in the annual cycle for passenger traffic. This year was no exception. But even if the industry’s performance could be classified as stronger than expected, we do face headwinds as we look towards the end of the year… We would expect to see air travel growth slowing in the next few months". He added, "now that international trade has stopped growing a strong near term renewal in air freight growth seems unlikely”. 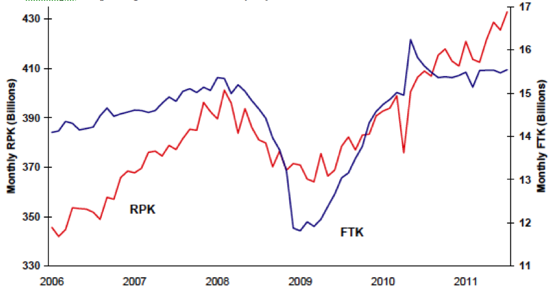 IATA said the expansion of travel in 2Q2011 and the beginning of 3Q2011 was “propelled by stronger economic growth and confidence at the start of the year”.  However, a number of challenges exist, namely recent declines in business and consumer confidence, the stagnation of international trade, and the ever-present threat of high oil prices.

Worldwide growth in air travel and business confidence: 2006 to 2011 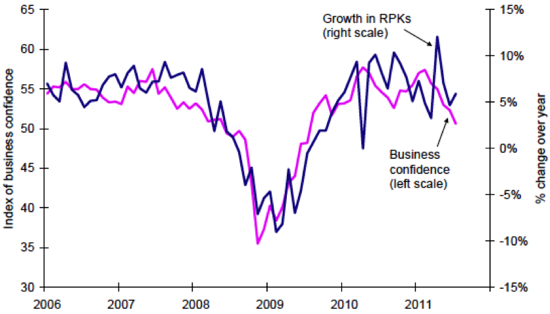 International passenger markets, which expanded by a healthy 7.3% year-on-year in Jul-2011, were much stronger than domestic markets (3.5%).

IATA added that there has been “very little growth” in the domestic market since the end of 3Q2010, “partly because of mature US market and its sluggish economy”.

Domestic US markets, which represent 50% of domestic wordwide travel, have shrunk 2% over the same period and China, the second largest domestic market, has seen an abrupt slowing from annual rates close to 20% to a pace of expansion of 5.1%. China's trajectory has been slowed by economic policies aimed at restraining inflation, IATA said. The weakness in domestic markets in Jul-2011 was also largely because of the slump in Japan, where passenger traffic declined 16.7% year-on-year and remains 16% lower than in Feb-2011 (ie prior to the 11-Mar-2011 earthquake and tsunami).

However, Indian and Brazilian domestic passenger traffic grew strongly, by 20.6% and 17.8% respectively. The strongest region continues to be Latin America, where airlines continue to see double digit growth. Despite the crisis in some European economies, airlines from the region have experienced one of the strongest expansions. 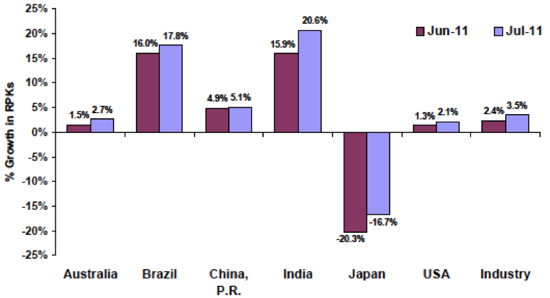 IATA also noted that strong domestic air travel in Brazil added to the leading international growth performance of airlines from Latin America in Jul-2011. The total traffic (RPKs) in this region rose 12.1% year-on-year. North America’s performance was also weakened by domestic markets, which represent two-thirds of total RPKs for these airlines. The performance of European airlines, with just 10% of their total RPKs coming from domestic markets, reflects their international bias. 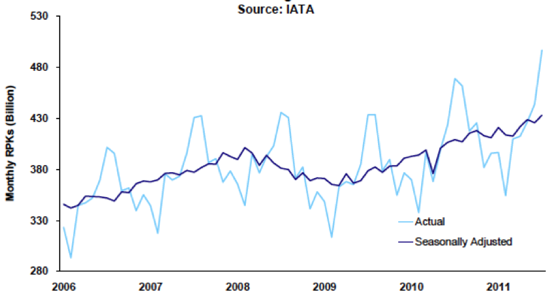 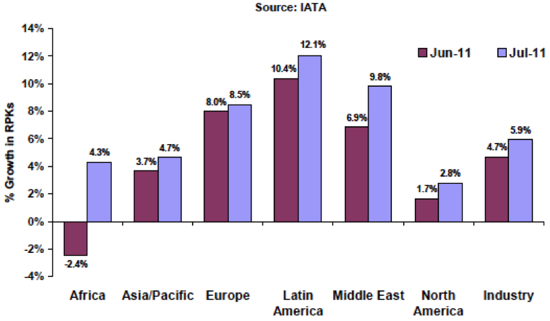 IATA stated that even after adjusting for the seasonal boost in the peak month of Jul-2011, there was a further underlying expansion in air travel in July. International traffic is up by an encouraging 7% so far this year. 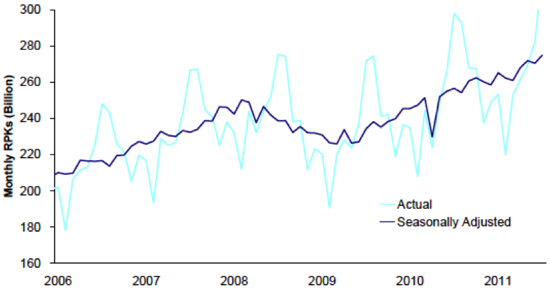 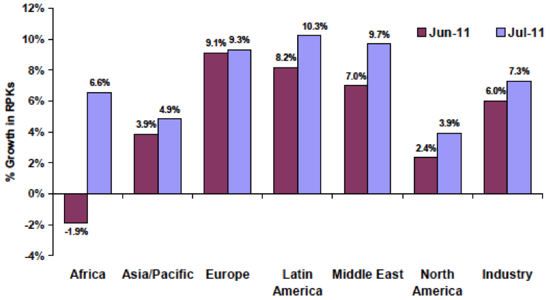 Passenger load factors averaged an impressive 83.1% in Jul-2011, recovering to the peak levels seen in 3Q2010 and following a weaker trend earlier this, due to a rebound in demand. 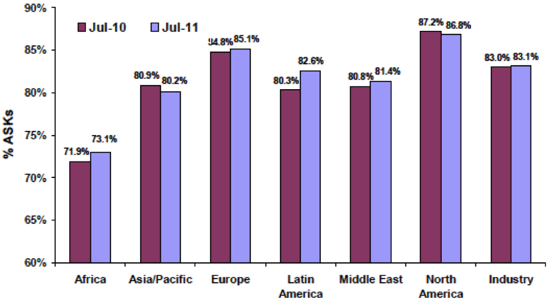 Freight markets stagnated in Jul-2011 and are expected to remain weak throughout the remainder of the year. The total freight market (domestic and international) is now around 10% weaker than pre-recession levels, driven by domestic declines. 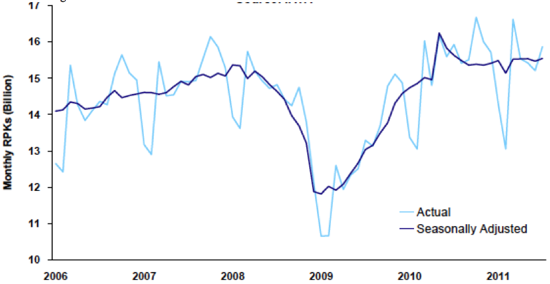 While all regions have witnessed freight weakness, this has been particularly felt in the Asia Pacific region, following the earthquake and tsunami in Japan, IATA said. Only airlines in the Latin American and Middle East regions have seen freight volumes grow at a high single figure pace. 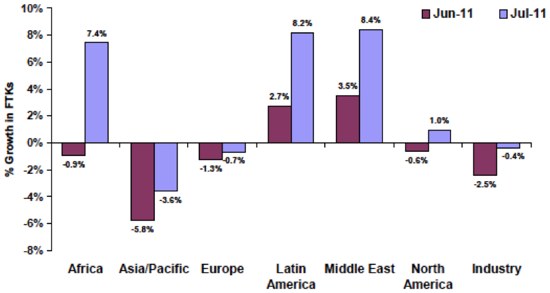 International airfreight markets were marginally stronger than domestic markets in Jul-2011. The volume of international freight levels in Jul-2011 has increased by just over 1% from the beginning of the year, but have delined by 5% from the peak reached in early 2010 and are now just 3% higher than pre-recession levels. 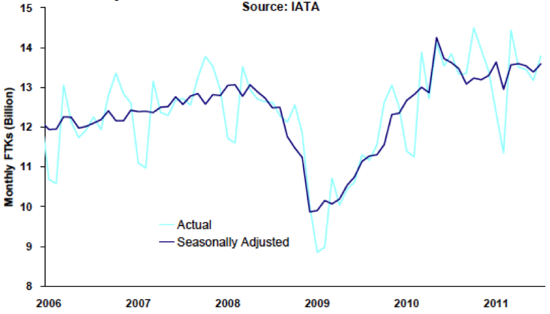 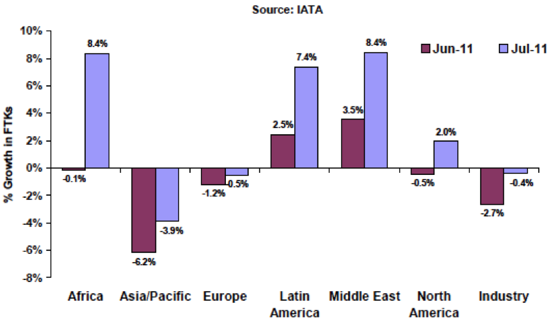 The continued single-digit capacity growth over the past 18 months, coupled with stagnating air freight markets have led to a steady deterioration in the average air freight load factor, which fell by 4 ppts since early 2010 and are now back to pre-recession levels. 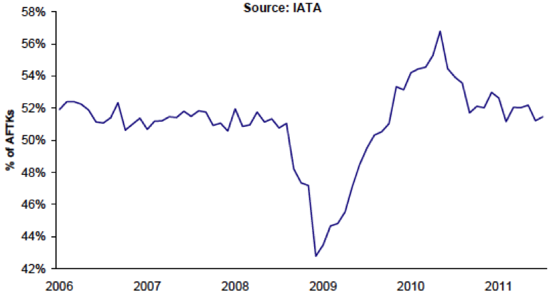 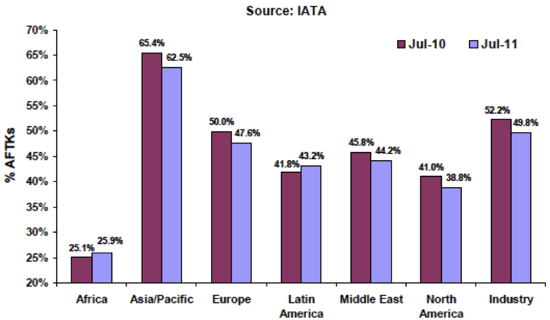 Despite the positive traffic results in Jul-2011, the peak travel month for air travel, the cloudy economic outlook and high fuel prices could result in slow growth in the second half of 2011 and the full year. IATA did not comment on the earnings outlook for airlines. 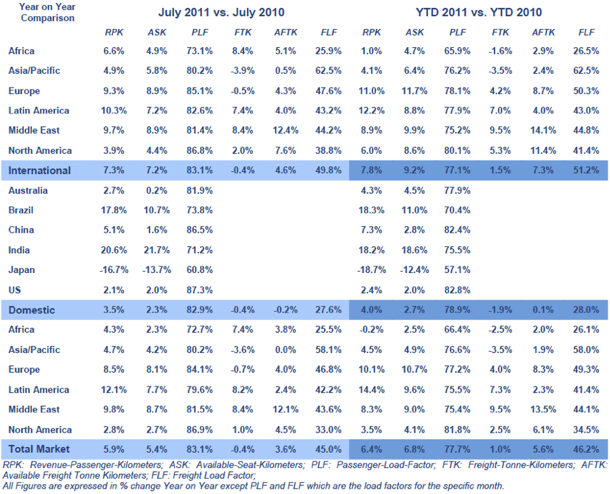 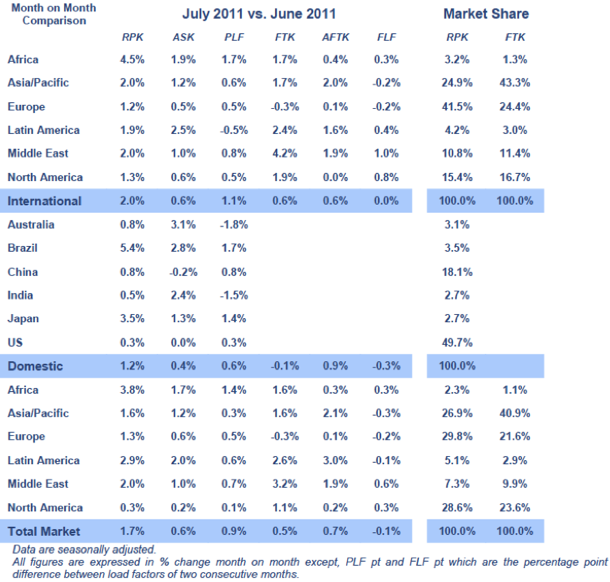