IATA, in its Jan/Feb-2011 Airlines Finance Monitor, stated airline equity prices worldwide, as measured by the Bloomberg global airlines index, have lost 6% so far this year. This compares with a 4% gain in the FTSE Global All-Cap Index. This follows a strong outperformance by airline stocks during 2010, when the global airlines index rose 28%. 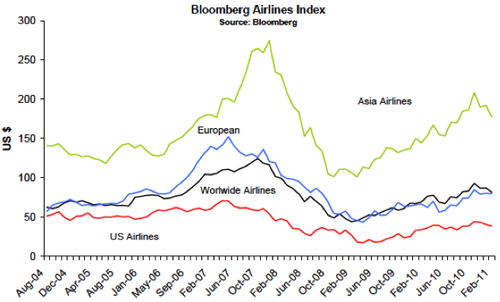 Airlines one of most exposed sectors to rising fuel costs

Financial markets are judging that airlines are one of the most exposed industries to the cost and potential demand impact of the recent surge in oil prices. The geopolitical risk premium has pushed fuel prices through USD128/barrel for first time since 2008.

IATA, earlier this month, downgraded its 2011 profit forecast from the USD9.1 billion profit projected in Dec-2010 to USD8.6 billion. The reason for the reduce profit forecast relates directly to the increased cost of oil. IATA noted that “oil is the biggest risk. If rises stall the global economic expansion, the outlook will deteriorate very quickly.”

“Rising oil prices are always a challenge for airline profitability. If they are accompanied by strong growing economies and world trade, airlines have some opportunity to command prices that can offset the rising fuel costs. If, however, rising energy prices stall global economic growth there is a strong downside risk to this forecast. With oil prices now being driven by speculation on geopolitical events in the Middle East rather than strengthening economic growth, this is a significant downside risk,” Director General Giovanni stated. 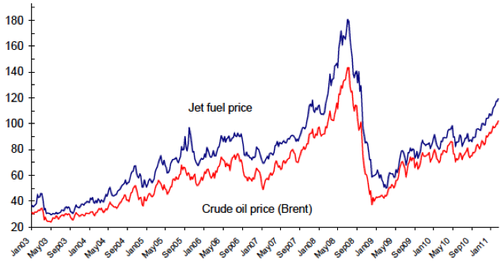 Passenger yields and fares continued to rise at the end of last year, despite a softening in load factors. IATA noted that this latest rise is likely to reflect attempts to pass-through fuel cost increases, rather than any improvement in pricing power.

IATA noted that airlines are able to recoup higher fuel costs through higher fares when there is tight supply-demand conditions. At present some partial cost pass-through is possible. However, if load factors continue to slip, this will weaken the ability of airlines to recover costs, and profits will suffer.

IATA stated over 1400 aircraft are scheduled for delivery in 2011, for an average monthly delivery of over 120 aircraft, up from 100 in 2010. Meanwhile, older aircraft are coming out of storage and being scrapped. The high jet fuel price will help to accelerate this process. Nonetheless, new deliveries represent a potential overhang in capacity that could add to the current squeeze on profit margins, according to IATA. 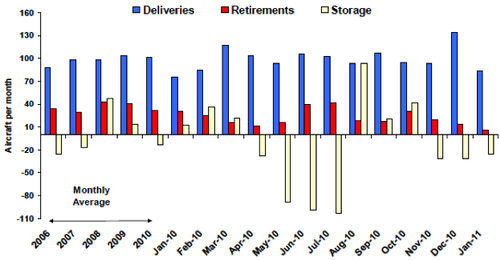 Capacity on both passenger and freight markets is now running ahead of traffic volumes. At present, published schedules are still close to the expected expansion in demand with careful capacity management expected to by key in ensuring profitability in 2011. 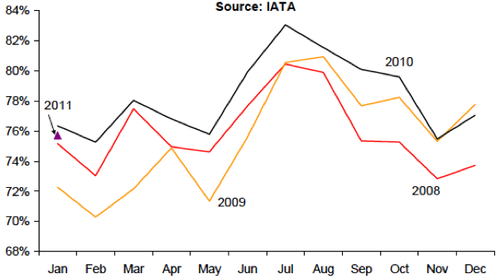 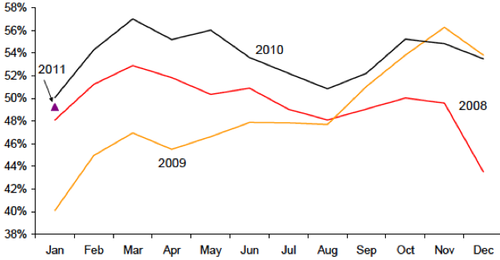 As previously noted by IATA in its 2011 financial forecast, released on 02-Mar-2011, the aviation industry is balancing on a “very thin tight-rope” and there is a “very little buffer for the industry to keep its balance as it absorbs shock”.  While passenger demand remains robust, driven by improved economic conditions, rising oil prices are presenting a huge challenge for airline profitability.