IATA, in its September-October Airlines Financial Monitor, stated airline share prices are “still on the way up” with the “second leg of the share price recovery well underway” reaching a level twice 2009’s lows. IATA added that it expects a widespread recovery in profits in 3Q2010 although yields and fare growth are now stalling.

Share prices in Sep-2010 continued the growth trend witnessed in Aug-2010 with the Bloomberg global airline share price index doubling from its 2009 low. However, IATA noted: “There are not only differences between regions but within regions too. The IATA upgrade for the 2010 outcome and, following this, the anticipation of stronger than expected results from US airlines drove prices higher as analysts used the news flow to revisit their mainly positive recommendations.” 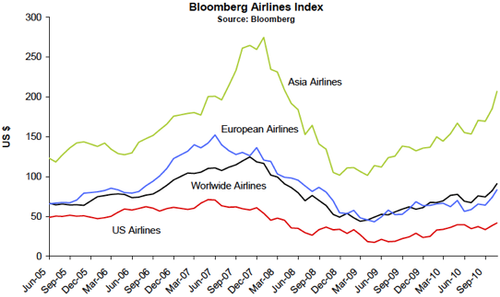 While only a very small number of airlines (predominantly US) have announced their results for the Sep-2010 quarter, IATA commented that the outcome has been “dramatic” with better than expected results. IATA noted that against a weak economic background these US airlines in aggregate have reported operating profits similar to those at the peak of the cycle in 2007 with IATA stating that this demonstrates the “extent of the structural changes that have occurred”.

Early results from European airlines also look encouraging with IATA adding that ”the 'mood music' for most of those yet to report from these and other regions suggests a widespread recovery in profits”.

Recovery in fares and yields stalling

The recovery in US domestic yields and international fares has stalled. Furthermore, compared with the corresponding months in 2008, yields are 7% or so lower and international fares some 12% down. Whilst planned capacity increases in North America would appear to be modest for winter 2010, IATA noted that the greater challenge is to hold the improvement achieved so far against the background of a still weak economy. 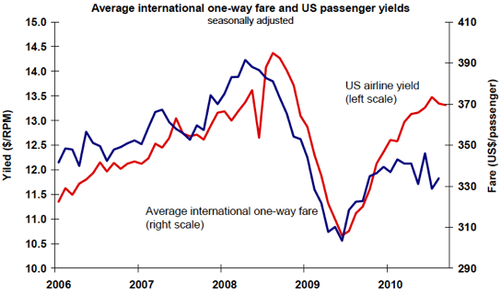 IATA noted that fuel prices remain in the USD80-100/barrel range with the decline in the US dollar being helpful in local currency terms as noted individually by numerous carriers worldwide. According to IATA, the latest indications from OPEC, where production is some 2 million barrels per day above the 26.8 million quota, is that they are “comfortable” with current prices although concerned by the US dollar weakness and the prospect of an economic slowdown. Other than the seasonal effects of the northern winter, there appear few risks to the fuel price on the upside according to IATA. 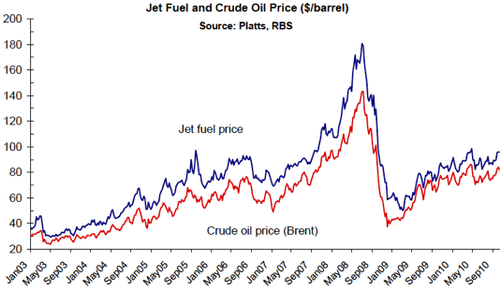 IATA noted that while a number of airlines have announced that they will be bringing aircraft out of storage, which will see reflected in the Nov-2010 statistics, the greatest source of capacity increase in the near term remains the restoration of flying programmes with previous levels of utilisation. Overall capacity for Nov-2010 is expected to be around 8.4% higher with just under 5% more flights compared with a year ago. 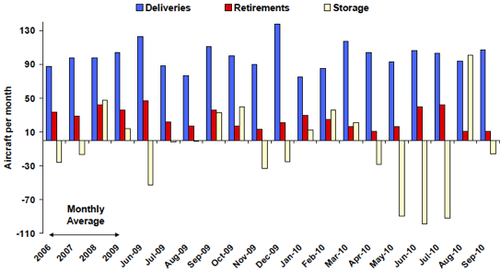 IATA also reiterated demand, capacity, load factor and freight data for Sep-2010 noting that headline rates of traffic growth are inevitably slowing although traffic growth remains above historical trend rates. Meanwhile, cargo growth is slowing and has slipped back to pre-recession peak levels and load factors are moving back to “more comfortable” levels, tracking those of the last peak year, 2007.

Outlook: traffic and profits to slow in 2011

Looking forward and growth will continue to slow, consistent with IATA’s global industry outlook, with the industry now expected to post a profit of USD8.9 billion (up from the Jun-2010 forecast of USD2.5 billion) based on an exceptionally strong first half of the year.  Meanwhile, much of what happens next is dependent on the economy. The industry also remains fragile, after taking a battering through the global economic downturn in 2008-2009.