Airline shares strengthen on share and profit recovery in 3Q

IATA, in its October-November Airlines Financial Monitor, stated positive 3Q financial result announcements have given airline shares a “further boost”, with some notable exceptions, as the airline share price index increased by a further 12% over the past month led by the Asia Pacific.

IATA added that 3Q2010 financial results were “much better than anticipated” and underlying the extent of the industry bounce-back which has shown Asia Pacific carriers have the largest market capitalisation in the industry. Passenger and freight traffic growth, meanwhile, remains above trend, with solid growth being seen going into 4Q, while passenger load factors have regained their highs.

IATA added that the gain in airline shares over the past month and the 37% increase so far this year has outperformed the FTSE Global All-Cap by around five fold. Looking forward, IATA cautioned that there will likely be a need for earnings upgrades to maintain the momentum given the forward looking nature of the share markets 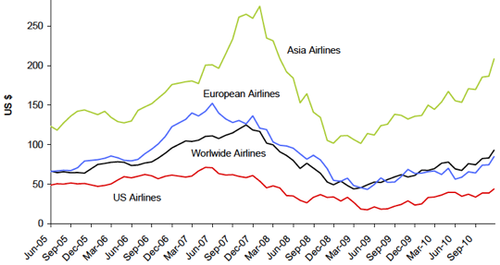 Sharp recovery in profits as new peak profits are reported

Source: IATA
NB: Results based on USD million
The sample of 51 airlines reported here is usually the best performing in an industry of over 1,000 airlines.

Yields and fares on way up again?

The yield situation has also improved since the last forecast, when IATA stated that the recovery in US domestic yields and international fares had stalled. Based on recent data, IATA noted that there has been a “move back upwards” aided by capacity continuing to grow at a slower rate than traffic. IATA added that yields could be “on the way up again” highlighting the uncertainty of the yield situation.

The latest data suggests a recovery for US airline yields to within 4% of the Oct-2008 yield and to within 10% of the recent peak in Aug-2008. However, the average international fare remains more than 10% below pre-recession levels. 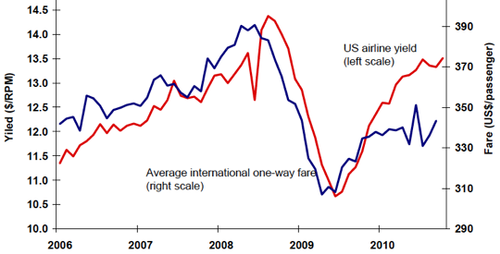 IATA noted that fuel prices remain in the USD80/barrel range, at a level which OPEC has in the past described itself as “comfortable”. IATA added that all indications are that if prices remain stable and broadly within a band of USD80-100/barrel, then there is unlikely to be a change to quotas at the Dec-2010 OPEC meeting.

IATA added that the recent increases in the price of oil back to the top of the range of the past year has more to do with seasonal factors and the heating season rather than anything more fundamental. 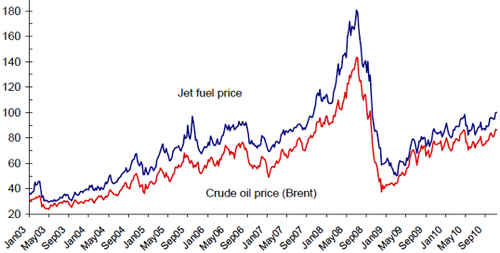 Oct-2010 saw an increase in the in service fleet by a net of 70 aircraft with new deliveries now the major source of new capacity after a period where aircraft coming out of storage added almost as much capacity as new deliveries. 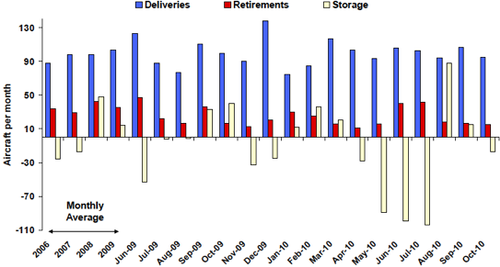 IATA also reiterated demand, capacity, load factor and freight data for Oct-2010 with IATA noting that traffic growth remains above trend, with solid growth being seen going into the last quarter of the year. IATA added that the 3Q2010 results “very clearly” show the benefits of restrained passenger capacity growth. IATA expects a continuation of the favourable supply/demand balance for at least the first month of the final quarter. Traffic growth, meanwhile, is expected to slow further not least as the comparison become more difficult and also because, in volume terms, traffic (RPKs) are at a new monthly peak.