Aircastle rises on ECA support for A330 financing

Aircastle’s shares rose 4.8% on Friday, on the same day it received approvals from the European Export Credit Agencies (ECA) to support up to USD530 million of debt financing for seven new A330 aircraft.

The support relates to two A330-200Fs scheduled for delivery to an affiliate of the HNA Group, parent of Hainan Airlines, in 2010 and five new A330-200s scheduled for delivery to South African Airways during 2011. Additionally, Aircastle announced that it has received a commitment from Sumitomo Mitsui Banking Corporation for up to USD250 million in ECA-supported debt financing for the first three A330-200 deliveries to SAA in 2011. Aircastle is currently in discussions with banks concerning financing for the other SAA and the HNA aircraft.

It was a good day for aircraft lessors, with Babcock & Brown Air advancing 5.1%, Aerocentury gaining 4.1% and Aercap rising 2.3%. 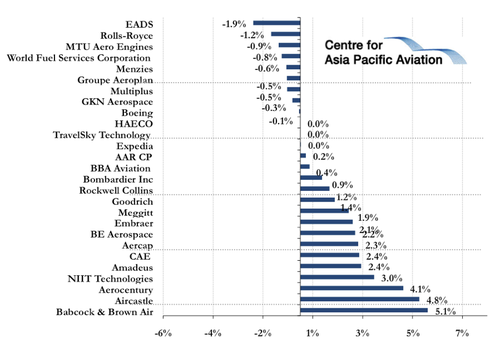