Aircastle shares fell 4.8% yesterday, coinciding with the release of the company’s second quarter and first half financial results to Jun-2010. The leasing company reported a 34% year-on-year reduction in net profit in 2Q2010, to USD18 million (or USD0.23/share), with revenues decreasing 4.9% to USD130 million and cost increasing 0.3%%. The result fell short of analyst expectations of USD0.25/share in the quarter. Meanwhile, the company’s operating margin fell from 20.5% to 16.2% in the quarter, as costs rose slightly on higher depreciation expenses.

Commenting on the results, Aircastle CEO, Ron Wainshal, stated the company saw “improving industry conditions" during the quarter, as passenger traffic recovers from recessionary levels. He added that Aircastle has recently generated higher lease-rental revenues and fleet utilisation has remained near 100%. As of 30-Jun-2010, Aircastle owned 129 aircraft having a net book value of USD3.7 billion.

Aircastle’s share price has risen only 4.1% in the past year.

Meanwhile, shares in JBT Corporation were also weaker yesterday, down 4.1%, while on the other end of the spectrum, shares in Will Lease Finance Corp gained 5.8% and Air Partner shares were up 4.5%. 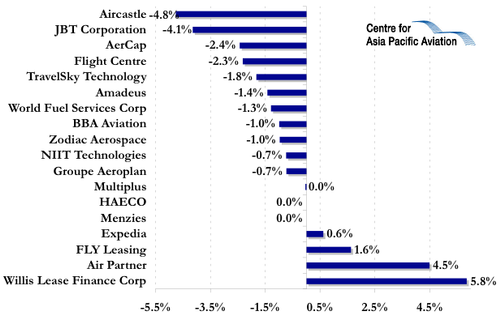 Boeing assesses B787 issues; still aims for first delivery by end of 2010

Boeing Commercial Airplanes CEO, Jim Albaugh, stated the manufacturer is assessing new issues related to manufacturing the B787 but added that the company still aims to make first delivery of the aircraft by the end of 2010. Mr Albaugh stated the issues relate to manufacturing the aircraft and not to its operations, adding that Boeing believes the issues will be "readily addressed". He added: "We're working very hard to get to entry into service."

Boeing could take back more production from suppliers

Mr Albaugh also stated the manufacturer could take back more production system work from suppliers, adding that it is "really happy" with its purchase, last year, of B787 operations from Vought Industrial Industries and Alenia Aeronautical, a unit of Finmeccanica SpA.

Ascend Director, Les Weal, said the decision by Airbus and Boeing whether to upgrade their respective narrowbody aircraft with new engines could potentially reshape the industry, commenting: "Narrowbody planes are the cash cow of Airbus and Boeing's businesses. The consequences of what they do are profound."

Boeing shares slipped 0.5% yesterday, while shares in EADS closed down 0.4%. 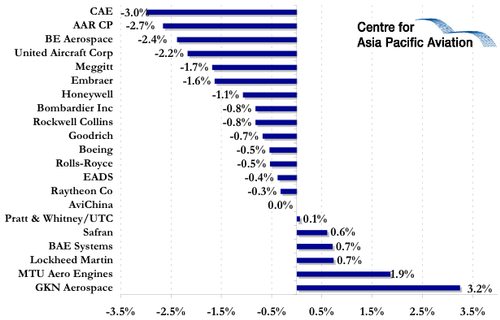