Aircastle has continued a solid series of profit reports for aircraft leasing companies, declaring a net profit of USD23 million in 4Q2009 and a full year result of USD104.8 million. While the result is a decrease of 30% on the USD150.1 million profit it reported in 2008, the company was satisfied to report it is entering 2010 in a “stronger, more competitive position”.

Over 2009, lease revenue declined 6% to USD542 million, while maintenance revenue dropped 41% to USD34.5 million. Total revenues declined only slightly (-2.1%), to USD582.6 million. Exacerbating the problem was a USD6 million increase in expenses, mostly as a result of higher maintenance costs and a USD18 million impairment on aircraft.

Aircastle maintained a 98% asset utilisation rate on its fleet of 129 aircraft. The company also announced it has placed 11 of 12 A330s, six with South African Airways, two with Aviance and three to HNA Group. Aircastle leases 90% of its aircraft outside the US, a figure unlikely to be altered significantly any time soon, as US carriers are largely making do with their current fleets. The company has offices in the US, Ireland and Singapore.

Meanwhile, EADS shares fell for the fourth consecutive day, down 2.8% yesterday. The company’s shares have lost 5.6% over the past few days, as investors assess the fallout from the company’s 2009 net loss and withdrawal from the US Air Force tanker programme. Competitor Boeing gained just 0.1% yesterday, despite good news emerging from the B747-8F test programme, with the first aircraft achieving its airworthiness milestone. 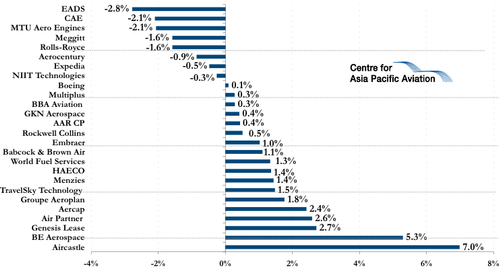