Shares in Airbus parent EADS gained 0.7% yesterday. Airbus CEO Tom Enders stated it has revised its expected orders from 300 to 400 for the year.

Mr Enders stated the manufacturer reviewed the number of orders it expects as it sees an end to the financial crisis, adding that it has benefited from steady growth in Asia. He said that Airbus sees China as its main future competitor.

Boeing Commercial Airplanes President and CEO James Albaugh, speaking at the American Base Association Forum on Aerospace, stated the manufacturer hopes to decide within the next several months on whether to develop a new aircraft to succeed the B737. The manufacturer is considering whether to re-engine the B737 or develop an all-new aircraft. Mr Albaugh added that Boeing is also determining whether to modify and upgrade its B777 equipment.  Shares in Boeing declined 0.6% yesterday.

Shares in Aircastle strengthened 3.3% yesterday with TradersHuddle noting that the company’s shares are trading very close to calculated resistance at USD9.18 with the current price action closing at just USD9.05, placing the stock near levels that make it difficult to buy. 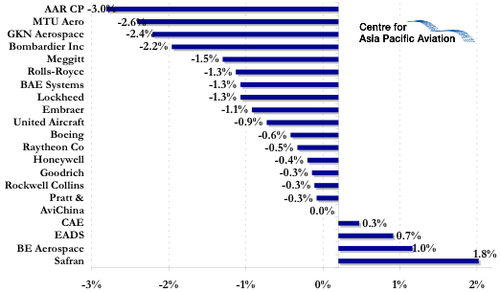 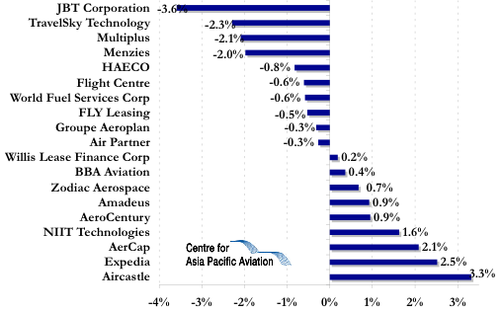