According to Reuters, Airbus is likely to top Boeing in terms of gross and net orders (gross orders minus cancellations) over 2010. Boeing took 625 gross and 530 net orders last year, after suffering large numbers of cancellations on its delayed B787 programme, as well as 30 B777 cancellations.

At the end of Nov-2010, Airbus had 440 gross and 388 net orders, meaning the manufacturer needs to have signed orders for more than 140 aircraft in Dec-2010 to match Boeing. Airbus is due to announce its 2010 tally later today.

Meanwhile, EADS CEO Louis Gallois has announced that the manufacturer will be taking a more collaborative approach to aerospace manufacturers in key developing markets in Asia and South America. EADS is already interested in acquisitions – particularly in North America – and recently confirmed it plans to make two to three significant acquisitions this year.

EADS will look to China, India and Brazil to become “local citizens in major emerging countries”, according to the CEO. Louis Gallois. With new challenges emerging from China in the form of COMAC and Brazil’s Embraer emerging from the global financial crisis in a much leaner form, EADS is looking to build partnerships in the civil and military spheres to continue to diversify its interests away from its dependence on Airbus.

Shares in EADS were up 2.2%, while Bombardier shares gained 2% and Boeing shares rose 0.2%.

Embraer shares leapt 10% on Friday. Goldman Sachs Group added the stock to its “Americas conviction buy” list and forecasting a positive fourth quarter for the Brazilian company. New regional jet orders have also been forecast for the company. 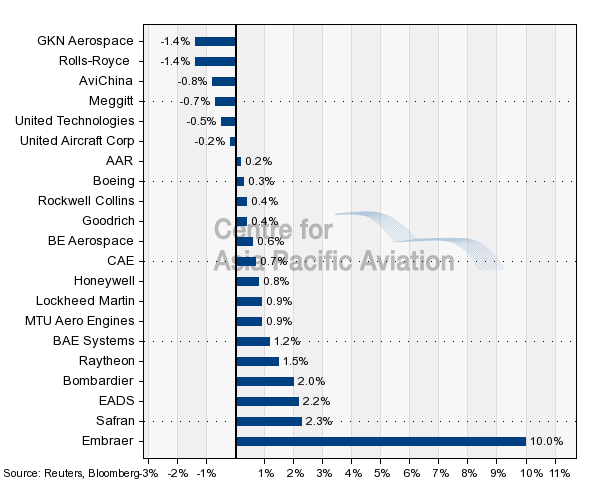