Airbus has released its orders/deliveries for Sep-2010 revealing a solid performance. Orders were received for 78 widebody aircraft and the manufacturer delivered 45 aircraft last month.

On the deliveries side, Emirates received one more A380, the 37th A380 to roll off the production line. Eleven A330/A340 widebody aircraft were delivered during the month, including the first three A330-200Fs to Etihad Airways, Turkish Airlines and Aircastle (for Hong Kong Airlines). Single-aisle A320-family deliveries in September were composed of five A319s, 27 A320s and one A321.

The final B787 Dreamliner to join the flight test fleet made its first flight on 04-Oct-2010 from Paine Field in Washington. The aircraft is the second B787 equipped with General Electric GEnx engines to fly.

Boeing stated the test team has completed a number of flight test milestones in recent weeks, including a series of natural and artificial icing tests. Flight loads survey testing, which demonstrates the pressure distribution on the aircraft structure throughout the phases of flight in a variety of configurations, also has been completed. A dramatic series of tests that stress the aircraft's brakes, called maximum brake energy testing, was completed in late September at Edwards Air Force Base, California.

Boeing stated that as a result of these tests and others, “all take-off performance and handling characteristics testing is complete for the initial version of the 787. Additional testing will be required for 787s equipped with GE engines.”

The 787 flight test program has logged more than 1,900 hours over 620 flights and completed more than 65 percent of the flight test conditions for 787s with Rolls-Royce engines. 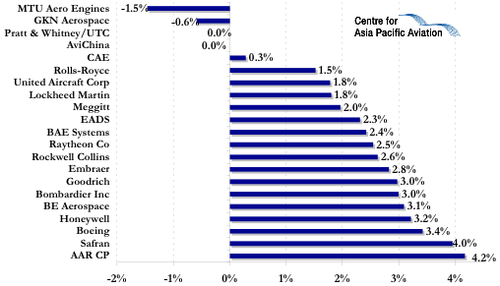 TSI specialises in products that manage heat flow and cool electronics. The agreement is expected to be completed in 4Q2010 and B/E Aerospace stated it would be earnings accretive after 2011.

Other supplier and leasing stocks were generally higher yesterday. 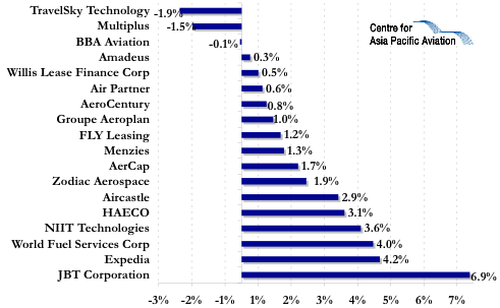