Airbus’ Executive Vice President Programmes, Tom Williams, stated he believes 2H2011 will see return to aircraft ordering. Speaking to Reuters, the executive stated that 2010 will be a “low” year for ordering, repeating the experience of 2009. But the manufacturer’s strong order backlog, of 3,500 aircraft, and continued strength in deliveries, with more than 450 aircraft due to be delivered this year, will see Airbus through the year.

Airbus expects the recovery to take a V shape, rather than the 'double-dip' W shape that many (still) fear.

Airbus and Boeing have so far managed to avoid major production cuts, by managing their delivery schedules and helping weaker customers delay/defer aircraft orders. Airbus stated in Jan-2010 that it has moved approximately 600 aircraft around its production schedule over the past 18 months. Many of these have been due to an inability of customers to make predelivery payments.

The European manufacturer has committed EUR1 billion to help customers with purchases, although it is “reluctant” to provide financing to customers, as it considers itself a “lender of last resort”. This amount is still well short of the level of financing that Airbus provided at the end of the 1990s and in the early part of last decade.

Meanwhile, Airbus’ parent, EADS, confirmed that its troubled A400M programme is approaching a crucial decision period, with European governments reportedly expected to resolve the financial dispute on the delayed programme this week. Four years in delays and cost overruns have blown the cost out by approximately EUR5.3 billion.

On Friday, seven European partner nations - Germany, France, the UK, Spain, Belgium, Luxembourg and Turkey - submitted a proposal to EADS over funding, but no firm commitment has yet been made. They reportedly committed to EUR2 billion to cover the programme funding gap, as well as a EUR1.5 billion in loan guarantees.

EADS stated it expects a decision to be made at an upcoming European defence ministers' meeting, to be held this week in Majorca. EADS has reportedly agreed to invest another EUR800 million to sustain the programme, leaving a reported hole of EU900 million to EUR1.1 billion to be filled.

Elsewhere, Boeing confirmed sent out 1,025 notices of potential layoffs to staff on Friday.

The 60-day layoff notices are for Boeing’s Engineering, Operations, and Technology unit, and are a part of the company’s plan to cut its workforce by 10,000 positions over 2009/2010. Boeing hopes to cuts 5,500 jobs from its military business and 4,500 from its commercial aircraft unit. 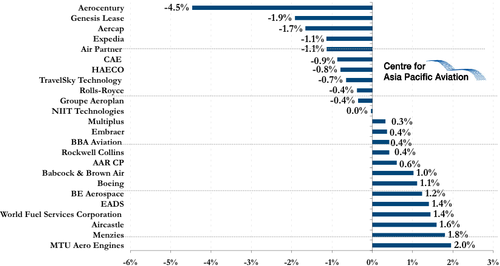