Airbus sees strong Asian orders, but not until 2012. Right now, there is too much capacity

Airbus has released its Asia Pacific aircraft orders forecast for the next 20-years, showing demand for some 8,000 new passenger and cargo aircraft valued at USD1.2 trillion. But with massive near-term deliveries, spare capacity on the ground, lower utilisation rates of the existing fleet and fragile earnings, Asia Pacific airlines are already flush with capacity and balance sheets are fragile. The last thing they need now is more capacity.

A combination of reduced utilisation (= spare capacity) and parked aircraft (= more spare capacity) means the system is already replete with capacity. And another 897 aircraft are scheduled for delivery in the region in 2010/2011, including 144 narrowbody aircraft to the region's fast-growing LCCs.

There is no doubt that long term growth will be exceptional. But having lost two years of growth (or three in some markets) in the past 12 months, the short term promises too many seats in the air - or on the ground.

Airbus stated the Asia Pacific requirement represents one third of predicted global deliveries between now and 2028, with the region driving demand for larger aircraft types. Airbus predicts that traffic in the region will grow at an average annual rate of 5.9%, while cargo traffic will increase by 6.3% p/a. This compares with a global average of 4.7% for passenger traffic and 5.2% for air freight.

According to IATA, deliveries of 1,245 new jets and turboprops to airlines worldwide exceeded storage and retirements by almost 800 aircraft in 2009. Despite cuts of 7% in passenger seat capacity and 10% in freight capacity during 2009, the size of the in-service fleet grew by over 3% - a combination achieved by cutting average hours flown.

Aircraft retirements, deliveries and in storage: 2006 to 2010F 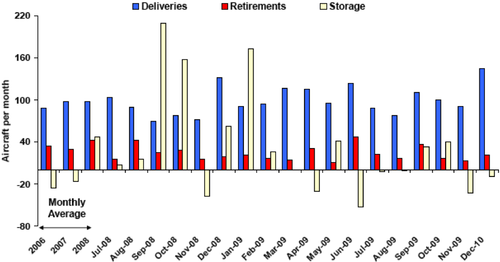 IATA reports the average daily hours flown by the existing worldwide fleet of widebody and freighter aircraft is down around 7% from early 2008 levels. With over one third of the global widebody fleet residing in the Asia Pacific region, it must be assumed (without a regional breakdown of the IATA numbers) that this region’s airline are heavily involved in the global block hour reductions.

As at 03-Feb-2010
Source: Centre for Asia Pacific Aviation & Ascend

The global aviation industry is expected to reduce losses from USD11.0 billion in 2009 to USD5.6 billion in 2010, with the Asia Pacific carriers’ share of the losses shrinking from USD3.4 billion in 2009 to USD700 million in 2010. “Asia Pacific’s prospects are improving faster than other regions,” said IATA, but many of the region’s airlines have significantly weakened balance sheets from the past two calamitous years and several are in the process of being recapitalised by their governments - most notably JAL, the region's biggest airline.

475 of aircraft in storage, including newer types

Asia Pacific airlines currently have 475 aircraft in storage (including 68 that are less than 15 years old), according to Ascend. Only 68 are aged under 15 years, although 60% of these were still in full use until they were parked during the past year.

Singapore Airlines, for example, has recently grounded one B747-400 and a 13-year old B777, as it refreshes its fleet with A330 and A380 equipment. See related report:  Singapore Airlines in recovery mode, though economic uncertainties persist

Of the total Asia Pacific aircraft in storage (all ages):

Realistically, many of these will not re-enter service, at least with their existing owners. But even re-introducing aircraft that have only been parked in the period since mid-2008 would add around 1% of capacity overall.

B/E Aerospace's shares jumped 9.3% on Monday on some fairly bullish statements from Chairman and CEO, Amin J Khoury. Mr Khoury stated that although global economic signals remain mixed, there are some signs of stabilisation regarding several major metrics, such as international traffic.

The company expects traffic to begin to show sustainable growth and yield improvement, leading airlines to begin to return their parked aircraft back into service, creating a backlog of required heavy maintenance that will likely create additional demand for consumables and spares.

And – potentially significantly, as long as fuel prices remain relatively low – lease prices for these older aircraft have slumped in recent months. They are now both plentiful and cheap.

This opens the door to new entrants wishing to establish niche markets. Carriers like Viva Macau, whose growth plans were previously hampered by shortages of suitable aircraft, are now finding B767s readily available, and at greatly reduced prices. There will be others.

Assuming 7-10% underutilisation of existing Asia Pacific fleets, and adding back in another 1% of regional capacity as older, parked aircraft are re-flown, there should be more than enough seats in service this year; IATA forecasts 6.6% overall (passenger and cargo) traffic growth for the region for 2010.

That is, without adding a single new aircraft, Asian airlines could meet expected demand this year, and probably most of next, with their existing assets.

But there is more to come.

A further 468 aircraft are to be added to the Asia Pacific fleet this year (or 8.7%) of the existing fleet (including 72 narrowbodies to the region's LCCs), and a further 429 aircraft will arrive in 2011 (with another 72 narrowbodies to the LCCs), according to Ascend data. Over 40% of these will be delivered to the fast-growing Chinese airlines, but there must be concern that there is too much potential capacity in the system. As IATA observed in its latest Financial Health Monitor, “although aircraft are ‘full’ again, the airlines’ assets are still underutilised”.

Such an imbalance between supply and demand can only lead to one outcome: downward pressure on yields.

And if opportunist new entrants are prepared to take the risk, there are some emerging parallels with the fertile expansion period between 2002-2004, when aircraft values were low and availability was high. Conditions are improving for any proposed new operator.

At least the leasing companies and MROs would be happy to see that. Not so the incumbent airlines.

Perhaps a pause in aircraft ordering

This means that Asia Pacific airlines could show considerable constraint in ordering over the next few years. In a Bloomberg interview, Airbus Chief Operating Officer, Customers, John Leahy, conceded that the market will “stay slow for new orders until 2012”. This will be particularly so for Asia Pacific airlines.

But meanwhile, on the back of peak order years in 2007 and 2008, production levels at all of the leading manufacturers seem set to remain solid - at least through 2012, when the new orders start rolling in.

And one big factor in determining whether the parked aircraft remain on the ground, and how quickly airlines withdraw others from service, will be - the price of fuel. Although manufacturers sell aircraft more readily when fuel prices are low, they might just be quietly hoping for an escalation in the short term, so that some of that older equipment stays on the ground.