Airbus, the major operating unit of European aerospace giant EADS, announced it is considering its future in China to expand its presence in the fast-growing and high demand market. The commercial aircraft manufacturer is “looking at a much wider area to develop our presence and increase our footprint in China”, according to Airbus China President, Laurence Barron.

Initiatives could include more joint ventures with China’s rapidly developing aerospace industry. The state-owned AVIC aerospace conglomerate and its subsidiary companies, notably Xi’an Aircraft and Comac, are developing commercial aircraft aimed at the domestic and international markets. Comac’s new C919, due to enter service in 2016, is aimed at breaking the duopoly between Airbus and Boeing in the narrowbody segment.

Airbus already has a strong manufacturing presence in China, as well as sourcing parts from local aerospace manufacturers for its current products. Airbus has a 51% share in the Tianjin-based Airbus Final Assembly Line China (FALC), which went into operation in 2008 and produced its first finished aircraft in 2009, is the first major Airbus assembly plant outside of Europe.

The decision to expand production comes on the back of the steady popularity of the type and its significant order backlog, much of which is in the hands of Chinese carriers. Mainland Chinese carriers and leasing companies have more than 180 A320-family aircraft on order. See related report: Chinese airline stocks surge on yuan appreciation, 400th aircraft for China Southern

Airbus feels that the market in China is clearly large enough to accommodate the competition. Apart from aircraft manufacturing, the company is examining opportunities in aircraft financing and leasing, air traffic management and navigation, MRO and onboard wireless communications.

EADS shares were up 0.5% in trading yesterday. Boeing dipped 2.6% while Bombardier also lost ground, down 1.6%.

Elsewhere, Embraer shares fell 1%, despite US-based Tradewinds Global Investors moving to purchase 5.3% of the common stock in the company on Tuesday. The shares were acquired through a number of investors, including mutual funds and other vehicles. Financial details of the acquisition were not disclosed. 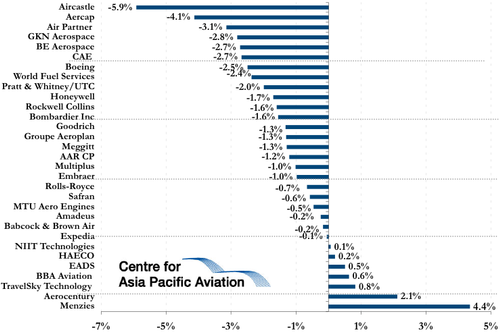