Airbus orders and deliveries to top 500 in 2010, AviChina up on strong outlook

EADS CEO Louis Gallois stated that the company’s commercial aircraft unit, Airbus, received more than 500 orders and delivered more than 500 aircraft in 2010. The manufacturer is due to announce details of its 2010 orders and deliveries in late Jan-2011. Airbus had booked 440 gross and 388 net orders for the year to the end of Nov-2010. The manufacturer delivered 461 aircraft for the same period. Boeing delivered 462 aircraft this year and took orders for 530.

Airbus delivered 18 A380s for the full year, missing its target by two. Lower A380 production costs and the move to serial production of the A400M are expected to pave the way to better profitability for EADS in 2011. The recovery in commercial aircraft ordering, as well as better performances in helicopter, security and defence units are also forecast to help profitability.

Mr Gallois also confirmed that the company is in the process of acquiring companies in the defence, security and other sectors in North America. The company is investing EUR1 billion-2 billion in the acquisitions, drawing from its cash stockpile of EUR10 billion.

Shares in AviChina rose 2.4%. CAAC reported this week that revenue in the Chinese civil aviation industry surged 37.2% in 2010 to CNY411.5 billion (USD62.4 billion). The CAAC Vice Director, Wang Changshun, linked the record performance to the general economic recovery and a strong demand for air travel. Industry net profit was USD6.6 billion according to the CAAC 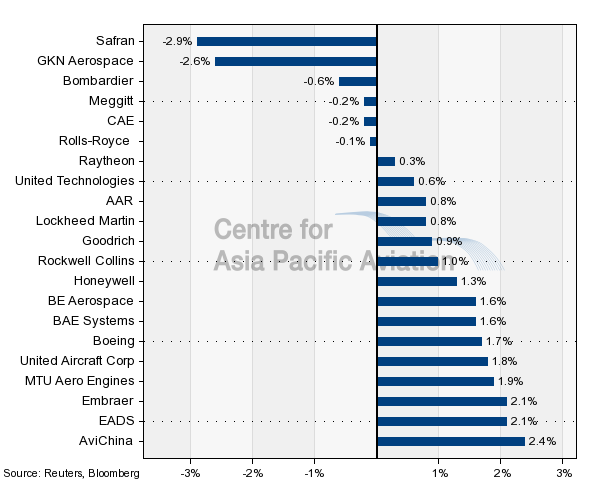