European aircraft manufacturer Airbus’ woes with the A380 linger on. After initially forecasting 21 deliveries for the aircraft in late 2008, the manufacturer revised the target to 18, then 14, during the year and confirmed yesterday that it will only deliver ten A380s in 2009 - two less than last year.

The type is now in service with four of the 19 airlines that have ordered it – Singapore Airlines, Qantas, Emirates and Air France. Since deliveries began in 2007 only 23 aircraft have entered service with customers.

The manufacturer has pushed back several aircraft due for late 2009 delivery into early 2010, with Lufthansa noting that its first A380 delivery has been delayed by several months.

The target for A380 deliveries in 2010 is currently set at approximately 20 aircraft. A firm target is due to be announced in Jan-2010, although there are reports that the manufacturer is looking at delivering 22 A380s next year, including as many as 14 in the second half.

With the recent delays and delivery problems with the A380, B787 and now Sukhoi’s SSJ-100, major manufacturers have had a torrid 2009 on the production front, and will be looking to rebuild customer confidence in their ability to deliver on their promises.

In trading on Wednesday, EADS’ share price lost 0.2%, while Boeing was down 0.5% and Embraer gained a single percentage point.

Meanwhile, Aircastle continues its positive momentum, up 4.1% at the close of trading yesterday. Since announcing details of a dividend payment and new lease deal for six A330s with South African Airways, the stock has been resolutely positive, gaining USD1.11 (+12.3%) since 18-Dec-2009. 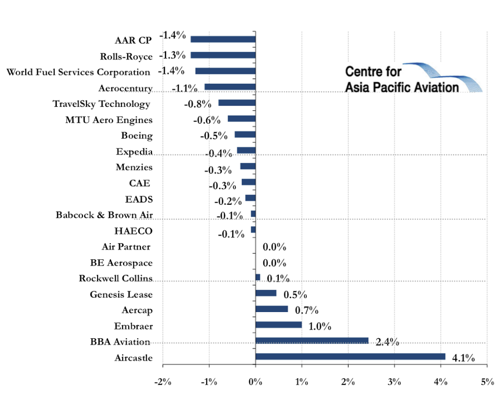