Airbus confirmed late last week that it will compress the A350 XWB flight test programme from 15 to 12 months. The move to shorten the test programme is as a result of additional design work on the aircraft, which is Airbus' response to Boeing’s B787. Five aircraft will be involved in the programme, with the first flight due in 2012.

Tom Enders, Airbus CEO, refused last week to eliminate the possibility of delays for the type, although Airbus insists that the estimated entry into service has not changed. Qatar Airways is the launch customer for the A350 XWB, with 80 on order. The first aircraft is due to be delivered to the airline in mid-2013. Qatar Airways CEO, Akbar Al Baker, has expressed confidence in Airbus' ability to get the aircraft right. He believes that even if there are delays for the A350, they will be on the order of “just a few months”. However, Emirates has called for more transparency on the programme, on delivery timetables and specifications for the aircraft, particularly weight.

Mr Enders commented in mid Apr-2010 that the schedule for the A350XWB was “hellish”. Engineering resources freed up from the A380 programme can now be channeled into the A350 programme.

Airbus and parent EADS have struggled with timely entry into service of several large aircraft programmes over the past decade, particularly the A380 and the A400M military transport. Delays in both programmes have already cost the companies billions of euros in cost overruns and compensation for customers.

Any major delays for Airbus, such as the two-year delay that Boeing experienced with the B787, would be highly damaging for the company and its share price. When 18 months and EUR4.8 billion worth of A380 delays were announced in late 2005 and early 2006, EADS stock dropped from a record high above EUR35 per share to EUR18 per share by mid-way through the year. EADS shares have generally tracked downwards since, hitting a low of under EUR9 per share in early 2009 before recovering to EUR14.59 at present.

Boeing’s share price has witnessed a similar decline. The stock hit a high of USD104.99 per share in late 2007, much of the price being buoyed by the unprecedented success of the B787, with more than 800 orders placed. However, multiple delay announcements for the B787, and the damage done to aerospace stocks generally by the global financial crisis, drove Boeing’s shares to just above USD30 in early 2009, before recovering to a recent high of USD75.59 per share. 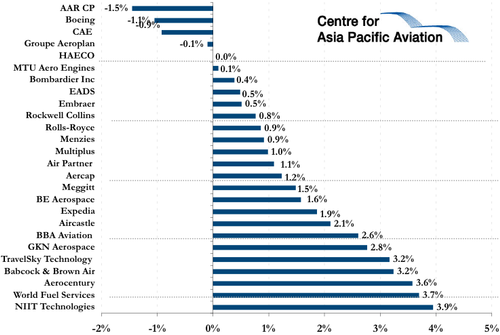