Airbus has said it is increasingly unlikely goal of 300 gross orders in 2009, but notes the failure to achieve this target is now of “secondary” importance to the avoidance of losing more orders and of maintaining an acceptable level of deliveries in 2010.

Airbus has booked 147 orders for the year, including just seven orders in August, against 22 cancellations, bringing its net orders to 125. It hopes to deliver around 480 aircraft for the year.

With the downturn in aircraft ordering and the difficulties suffered by many airlines in securing financing for new deliveries, the European manufacturer has frozen production rates for its A340/A330 family at 8.5 per month. A320 production is due to be cut marginally, from 36 to 34 aircraft per month, in Oct-2009. It also has a production weak spot in the A380, revising output downwards as of the mid-2009. “More than 20” A380s will be delivered in 2010, a far cry from the manufacturer’s original plans to produce 45 aircraft p/a by 2010.

Airbus has a number of major programmes in development at the moment, but the EUR11 billion A350 XWB programme is the largest by far. Even in the early stages of development (the aircraft is not due to fly until 2012, at the earliest) the manufacturer is determined to keep the programme on track. Airbus simply cannot afford another repeat of its over two year A380 production delay, or the problems that has cut Boeing’s orders for its B787 by more than 10%.

Airbus has already reportedly secured EUR3.3 billion in launch aid from France, Germany, the UK and Spain for the A350, but even this may not be enough. Airbus Chief Operating Officer, Fabrice Bregier, stated late last week that the manufacturer requires approximately EUR800 million to EUR1 billion in additional investment over the next six years, to help develop its next generation of aircraft.

The manufacturer announced in mid-Sep-2009 that it is pushing the first delivery of its new A330-200F back to Aug-2010. The aircraft had already been delayed once, in Jan-2009, from 2H2009 to the Northern Spring 2010. An A320 replacement is not due until 2024, partially due to Airbus’ commitment of resources to widebody programmes and partially due to the lack of technological improvements over the current narrowbody design.

Airbus’ engineering resources are “totally saturated” at the moment, according to Air France’s VP of Marketing, Revenue Management & Network, Bruno Matheu, speaking to the Wall Street Journal. The manufacturer has reportedly been unable to accommodate Air France’s requests for modifications to the A380’s cabin, to allow it to fit its Premium Economy cabin to the aircraft. Airbus has admitted that it is being very conservative regarding the A380, as it is still emerging from having to cable the first 25 aircraft by hand.

The coming Northern Winter and 2010 will be difficult for the manufacturer. Airbus hopes output will stay flat in 2010, but has cautioned that it cannot rule out further cuts in 2H2010. Much depends on its customers. Indian airlines are now only expected to take delivery of 30 Airbus aircraft in 2010, around 15 less than earlier forecasts, and Airbus is still watching its order book  “very carefully, airline by airline".

CEO, Tom Enders, has expressed concern that, due to low yields, airlines were unable to address their cash shortages during the peak Northern Summer period, and expects the trend of deferrals and cancellations of aircraft to continue. While it is still sitting on a mountainous 3,500 orders, the manufacturer is also under pressure from airlines and MRO providers to cut prices. Lufthansa Technik Executive Chairman, August Wilhelm Henningsen, stated airlines and MRO should "combine better to put pressure on original equipment manufacturers to combat escalating prices".

Meanwhile, Boeing confirmed on Friday it has received the draft Request for Proposals for the competition from the US Air Force for aerial refueling tankers. The contract is for a new fleet of 179 tanker aircraft valued at about USD35 billion, theoretically expandable to 400-500 aircraft and USD100 billion in value. Boeing and a joint Northrop Grumman/Airbus team are the two major contenders.

Both companies are now conducting a review of the requirements. Northrop Grumman/Airbus are offering a tanker based on the A330 commercial airliner. Boeing announced it is conducting a detailed review of the requirements, to decide whether to offer a tanker based on the B767 or the larger B777. Boeing had previously offered the smaller B767-based aircraft. 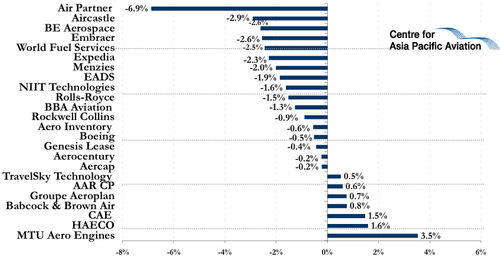