Aircraft manufacturers' stocks were mostly stable yesterday, with Embraer losing 0.7%, Boeing falling 0.1% (climbing back up after dropping USD1 in early trading) and EADS rising 1.8%. The European maufacturer has gained on Boeing’s B787 struggles and a crucial meeting on the A400M military transport programme, which could now reportedly be delayed by up to four years. Germany, Britain and France are now all reportedly willing to ensure that the programme survives, despite the delays.

MTU Aero Engines maintained its full year revenue and operating forecast as it reported its 1H2009 operating results yesterday, despite an admission of a difficult market situation for the Germany engine company. The market reacted strongly to the company’s results, sending its share price down 6.6% in trading yesterday, to EUR25.19, although at one point it traded as low as EUR24.70, before a late afternoon rally.

The company reported a 10% increase in revenue in 1H2009, although when USD exchange rates are factored in, revenues were down by approximately 2%, and described by the company as “almost stable”. MTU‘s operating profit was EUR137.1 million, with earnings in the commercial maintenance business increasing from EUR18.0 million to EUR39.9 million, helping the overall result substantially. MTU is counting on a similar level of performance from the MRO unit in 2H2009.

However, the operating result was 12.6% lower than in 1H2008, mostly due to “higher research and development expenses, ramp-up costs for new engine programmes, and a shift in the business mix”. Including exchange rate effects, revenues in its commercial engine business decreased 7% year-on-year.

MTU is investing substantially in engine programmes, including the PW1000G for the Mitsubishi Regional Jet and Bombardier CSeries, GEnx for the B787 and B747-8 on the commercial side. Military programmes include the 400-D6 for EADS/Airbus Military A400M transport (the manufacturer has not commented on delays to this programme) and the GE38 for the Sikorsky CH-53K heavy-lift transport helicopter. It is also investing in emerging engine technologies.

MTU expects full-year revenue of approximately EUR2.8 billion, about 1% better than 2008. Adjusted EBIT margin is forecast at around 10% (compared to 12% in 2008), while net profit is expected to fall to EUR140 million. Free cash flow is expected to be EUR80-100 million. 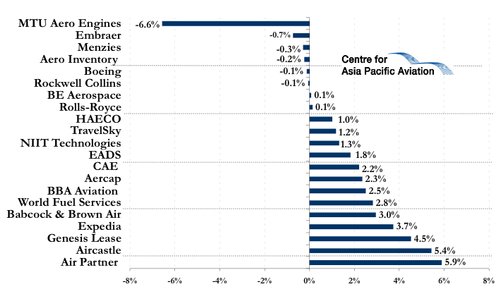