EADS and its partner Northrop Grumman are nearing a decision on whether they will compete with Boeing on the US Air Force’s latest round of its controversial USD40 billion aerial refueling tanker contract.

Northrop Grumman’s new CEO, Wes Bush, intends to announce in the next few days whether the company will submit a bid. Northrop maintains that the latest Request For Proposals favours Boeing’s entry over its own and has been reluctant to compete since the initial RPF was released.

After an initial contract awarded to Boeing was frozen in 2003, a new competition between EADS/Northrop Grumman and Boeing resulted in the A330MRTT being selected over Boeing’s B767-based design. However, Boeing protests over the decision resulted in the US Government Accountability Office overturning the contract award in mid-2008.

The latest contract is expected to be awarded in late 2010, for approximately 180 aircraft. Northrop had earlier stated that it would not compete under the current rules, but EADS is reportedly pressuring for a decision, as it considers the North American defence market a vital one for its future expansion.

Regional aircraft lessor, Aerocentury, reported a net profit of USD5.7 million in 2009, a 72% improvement on its 2008 results. The company’s lease revenue increased 10.8%, with Aerocentury purchasing additional leased assets in Aug-2009, as well as increasing lease rates on some aircraft.

However, maintenance income decreased, primarily as a result of lower average aircraft usage by some lessees. Two aircraft were off lease for a longer period in 2009 than in 2008.

Total revenue was up 5.7% year-on-year, although the company did manage to cut costs by 6.6%, primarily due to a USD2 million drop in interest payments. Shares in Aerocentury gained 1.7% yesterday. 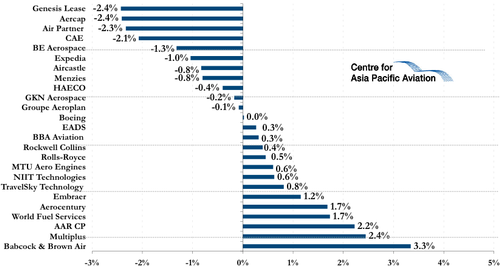