Airbus and Boeing looking to the future, but suppliers not convinced: Paris Air Show Wrap

Getting suppliers on side

Both companies are taking a long view on the current downturn, indicating their intention to increase production rates once the economic crisis is over and airlines start ordering again. Airbus CEO, Tom Enders, stated that the company was engaged in particularly intense discussions with its suppliers.

However, the suppliers' reactions have been mixed. Rockwell Collins CEO, Clay Jones, stated that there is “raging scepticism” among suppliers that manufacturers’ can swiftly ramp up production. MTU Aero Engines signaled it is confident it can move with any increase in production rates. In trading on Friday, Rockwell Collins' stock dropped 0.2%, while MTU was up 2.6%.

Both Airbus and Boeing are set to deliver approximately 480 aircraft each this year, but will be reigning back their output at the end of this year. Smaller manufacturers, such as Embraer (which received eight orders at Paris), have cut their deliveries targets for 2009, which is deeply affecting suppliers. Turboprop manufacturer, ATR, plans to cut 2009 deliveries by approximately 10% compared to 2008.

Leasing companies reported generally higher share prices on Friday, with Babcock & Brown Air up an impressive 12.6%. The company closed a USD32 million debt facility on Wednesday. Babcock and Brown, the Australian investment fund that owns 14% of the company, was delisted on 18-Jun-2009.

Other leasing companies were also up, with Genesis Lease gaining 1.4%, Air Partner up 1.7% and Aircastle climbing 2.4%. 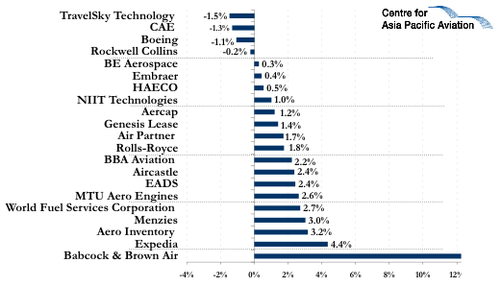