Boeing’s B747-8 took to the skies for the second time yesterday, with three more aircraft to join the test programme shortly. However, the ordering outlook for very large aircraft is expected to be slow over the next couple of years.

Airbus expects to sell just ten A380s this year, while hoping to double its annual deliveries to 20. The manufacturer sold just four A380s last year. Boeing expects to see some orders for the B747-8 in the 2H2010, with the beginning of a “thaw” in the aircraft market.

The problem for both manufacturers is that due to delays and programme cost blow outs, their very large aircraft programmes are in significant forward loss positions and will struggle to turn a profit, even over the long-term.

Airbus has sold 202 A380s, but estimated as far back as 2006 that it needs to sell at least 420 to break even on the programme. At Airbus’ recent results presentation, CEO Tom Enders confirmed that the A380 “will still be a financial liability of the company for years to come.” Boeing’s forward loss position on the B747-8 is greater than USD2 billion, and it will be a “huge challenge” to make the aircraft profitable.

Boeing however has an advantage with the B747-8 in the form of the freighter version. While international freight plummeted over 2008 and 2009, freight volumes are swiftly returning. Airbus' decision to abandon the A380F has ceded this market segment to Boeing, and the US manufacturer has capitalised. The B747-8 has 76 freighter orders and just 32 passenger orders (of which a quarter are for private VIP versions).

In trading on Tuesday, EADS, parent of Airbus, traded up 1.2%, while Boeing shares dropped 1.9%, in line with lower US markets. 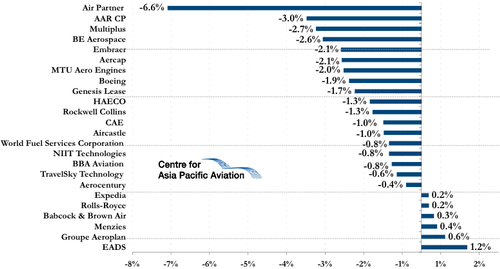