AirAsia reported strong revenue, passenger growth and margins in its latest financial report for the three months ended 31-Mar-2010. The carrier is also optimistic about the outlook for its business. One pleasing aspect was the substantial improvement in AirAsia’s openness and transparency regarding the performance of its Indonesian and Thai operations, as preparations begin for a potential IPO of Thai AirAsia. Investors welcomed the overall result, sending AirAsia’s shares 4.3% higher on the day of the earnings report (31-May-2010).

CEO, Tony Fernandes, stated he is optimistic regarding AirAsia’s prospects for the remaining quarters of 2010, noting forward bookings are “looking good”. Mr Fernandes admitted Europe’s financial and economic troubles “could become a drag on the global economic recovery” but added Asia appears to be showing little signs of a slowdown.

He stated, “there’s an increasing demand for air travel, especially in the Low-Cost Carrier segment. The rise in demand provides favourable opportunities for an upward-revision of fares in certain sectors.” The group handled over 6 million passengers in 1Q2010 compared to 5 million in 1Q2009, with solid growth across the three units, and with load factor increasing in all markets. 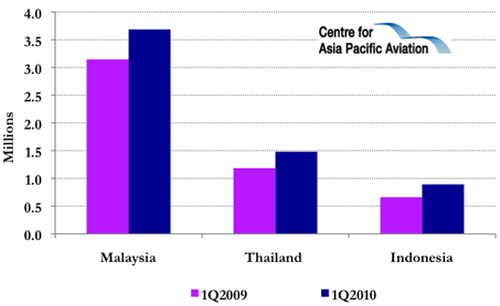 AirAsia Berhad announced a 10% lift in profit after tax of RM224.1 million (USD68.5 million) for the first quarter of 2010 (or a net margin of 25.5% - steady year-on-year), as revenues rose by the same amount to MYR878 million. But EBITDAR fell 17% year-on-year and core operating profit (profit before tax before adjustments) slumped by one third, which was mainly attributed to the 47% rise in average fuel costs. 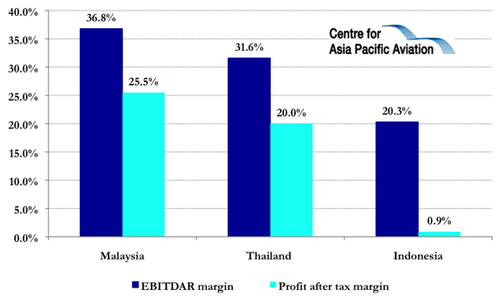 The Malaysian unit’s passenger numbers surged 17.1% to 3.7 million passengers, while passenger load factors rose 4 ppts to 74%. This was despite an 11.1% increase in capacity. 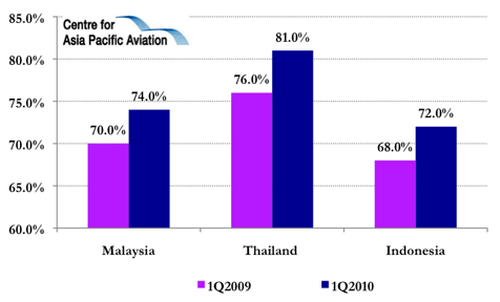 This is an extract from a report in the upcoming edition of Peanuts! Weekly. The full report, available for individual purchase, contains the following sections/data: