AirAsia to post strong results in 3Q and 4Q; Thai AirAsia to report profit of USD40m in 2010

AirAsia CEO Tony Fernandes yesterday confirmed the group’s Board of Directors would decide in Jan-2011 on how much of a dividend it would pay shareholders. He separately commented that the carrier expects to post a strong result in 3Q2010, while 4Q2010 will provide its strongest quarterly results ever.

Mr Fernandes also stated the carrier plans to handle its 200-millionth passenger in three years, due to the group’s “connectivity, more destinations and, of course, attractive fares”. The comments came after the airline handled its 100-millionth passenger this week, after nine years of operations. Shares in AirAsia gained 7.8% yesterday.

Thai AirAsia to be listed in mid-2011

Meanwhile, AirAsia stated Thai AirAsia would be listed on The Stock Exchange of Thailand sometime between 2Q2011 and 3Q2011. The carrier is aiming for a market capitalisation of USD500 million-550 million. It expects to mandate an underwriter and merchant bankers for the IPO by the end of Oct-2010. CEO Tassapon Bijleveld stated that when the carrier is listed, it would be able to finance the acquisition of 40 aircraft, which it plans to take delivery of over the next three to five years.  See related article: More than 30 airlines consider IPOs as market improves

Separately, Mr Bijleveld stated the carrier plans to slow growth in 2011 after an aggressive expansion this year, to instead focus on improving service quality and improve staff skills. The LCC will take delivery of only two aircraft for the year and launch just five new routes. It also plans to open Chiang Mai as its third Thailand hub in 2011 and will launch services from the hub to Bangkok, Hat Yai and Singapore. It is also considering increasing frequencies from Bangkok to Macau and Singapore. The move comes after an aggressive expansion this year, in which it took delivery of six new A320 aircraft.

Thai should focus on core not LCC ventures: AirAsia CEO

Separately, Mr Fernandes stated Thai Airways should focus on being a premium airline rather than trying to get involved in LCC ventures, questioning the need for Thai to establish Thai Tiger Airways under a JV with Tiger Airways.

The CEO stated Thai is already a very strong premium airline and there are still significant growth opportunities for the carrier, without launching an LCC. He noted Cathay Pacific has remained successful without launching an LCC and while Singapore Airlines has a stake in Tiger Airways, it is not involved in its operations. He added Tiger Airways is an “odd” choice as a business ally as it is not making much money. Shares in Tiger Airways gained 1.0% yesterday.

Also in the Thai market, Krung Thai Bank (KTB) reportedly sent a letter to Thai Airways offering to sell a 10% stake in Nok Air to the carrier with the proposal valid until 30-Nov-2010. Thai previously offered to purchase 5 million shares held by the bank for THB13 per share. However, the offer is well below KTB’s assessment, which is reportedly THB40 per share. Thai Airways is evaluating the new offer as well as Nok Air's business plan and business risk factors. 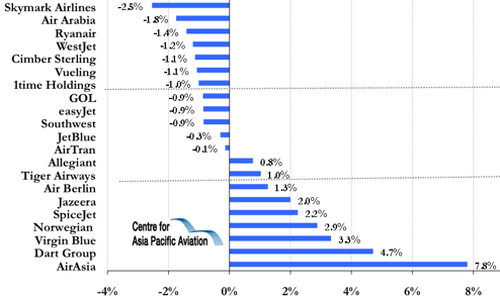