Qantas will report its yield/traffic figures for the year to April later this week and further falls are likely following depressed figures in March.

Qantas' shares rose 1.1% yesterday, as the carrier announced plans to temporarily remove First Class seating from Sydney-San Francisco, Sydney-Buenos Aires and Melbourne-Hong Kong-London services, in response to the economic slowdown and weak premium demand. These are targeted adjustments to right-size capacity in markets where Qantas faces no First Class competition (with the exception of United Airlines on the Sydney-San Francisco sector). Qantas is also selling exit row seating from next month, as part of aims to boost ancillary revenues.

Elsewhere, Singapore Airlines gained 1%, while AirAsia surged 4.2% ahead of its results announcement on 28-May-2009. Jet Airways eased 0.6% as it reported another deep full-year loss. 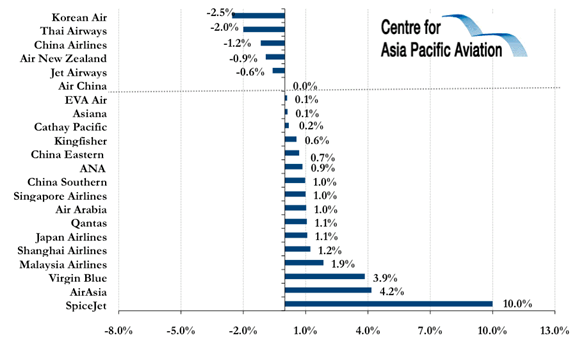