The LCC carried 4.04 million passengers in 3Q, a 12.5% year-on-year increase. Load factor was up 3 ppts to 78%, the average fare was up 22% to MYR173, and ancillary income surged 38% to MRY179.5 milllion. AirAsia’s Thai and Indonesian subsidiaries also carried more passengers, with Thai AirAsia carrying 1.36 million passengers (+8.8% year-on-year) and Indonesia AirAsia 1.08 million (+8.3%). Going forward, the airline said all the all signs are pointing to a “positive” 4Q across the group.

Brisbane-based Virgin Blue fell 4.5% despite gains on Australian markets. At the carrier’s AGM on Wednesday, CEO John Borghetti warned of “patchy” demand on its international network, ‘‘competitive pressure’’ in the industry and reduced consumer spending in Australia, which meant yield improvements would be unlikely in the short-term.

US-based LCCs were unchanged as markets were closed for the Thanksgiving Day holiday. 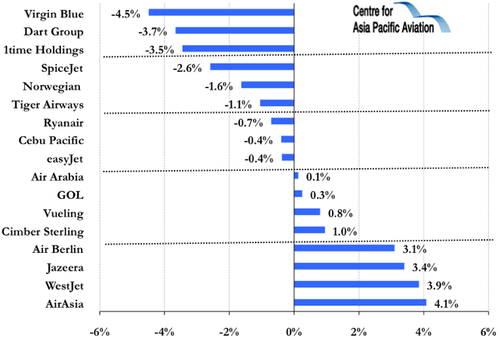