The Group also reported strong yields for the period, with revenue per ASK (RASK) for Malaysian operations up 15% to USD 5.03 cents. AirAsia Thailand reported a 8% rise in RASK, to USD 4.74 cents, while AirAsia Indonesia RASK was up 19%, to USD 4.74 cents.

CEO, Tony Ferndandez, stated forward bookings are “looking very good”, with the fourth quarter traditionally its strongest. As a result, the carrier is in a  “fantastic position” heading into its strongest season, following improved results in the first and second quarters.

The carrier has been edging higher after improved financial results for FY2009-10 and talk of plans to expand operations as demand, particularly in business markets, returns.

Air New Zealand announced during trading it has more than tripled the number of charter flights it will be operating from Japan to New Zealand this summer in response to a resurgence in demand from this high-spending tourism market. Between 26-Dec-2010 and 03-Apr-2011, Air New Zealand will operate 14 return charter flights to Auckland from nine departure points across Japan. General Manager Japan, Edward Overy, stated the carrier is deliberately focusing on new tourists from key regions across Japan including Nagoya, Fukuoka, Sapporo, Okinawa, Sendai, Kumamoto, Hiroshima, Miyazaki and Kagoshima. These visitors will complement those already travelling on Air New Zealand's 12 scheduled services from Tokyo Narita and Osaka Kansai each week. The charter flights will utilise 230-seat B767 aircraft.

Kingfisher Airlines (+4.4%) advanced, despite the Indian Ministry of Civil Aviation reporting a 1.7% year-on-year decline in the carrier’s domestic passenger numbers for Jul-2010 to 815,000. The carrier had a load factor of 79.3% for the month.

The carrier reportedly plans to sign a codeshare agreement with British Airways in Sep-2010. Kingfisher is due to join the oneworld alliance in 2011 with BA, one of the alliance’s founders, serving as sponsor.

Elsewhere, China Airlines (-2.1%) and Malaysia Airlines (-1.8%) ended the session in negative territory, while Skymark Airlines (+6.0%) was the day’s biggest gainer. 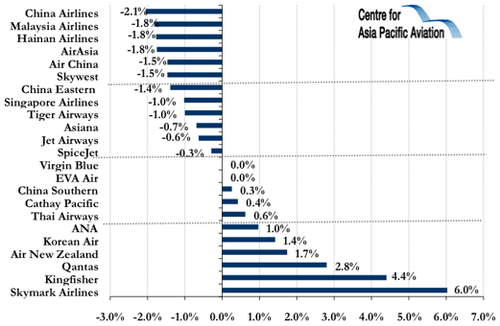